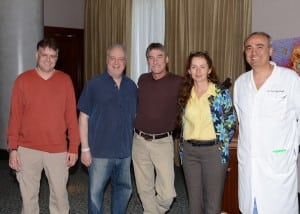 The Michigan man underwent the surgery in 2001 after his left hand was blown off by a defective firework, becoming the second patient in the United States to undergo a hand transplant. Fifteen years later, his surgery has impacted the future of both transplantation and reconstructive surgery around the world.

The 15th anniversary marks a major milestone for the program in Louisville and other centers across the United States.

Fisher is the second hand transplant patient to reach this anniversary. Tuna Ozyurekoglu, MD, hand surgeon with Kleinert Kutz Hand Care Center, and Christopher Jones, MD, transplant surgeon with Jewish Hospital Trager Transplant Center/University of Louisville, also spoke at the event about the success of transplantation and reconstructive surgery and the impact it has had worldwide.

The Louisville Vascularized Composite Allograft (VCA) program is the oldest hand transplant program in the United States. The VCA is a partnership of physicians, researchers and healthcare providers from Jewish Hospital, part of KentuckyOne Health; the Christine M. Kleinert Institute for Hand and Microsurgery (CMKI); the Kleinert Kutz Hand Care Center; and the University of Louisville.

How to Succeed in Business Without Really Trying first appeared on Broadway in 1961. It won a 1962 Pulitzer Prize for Drama and was hailed by critics as “crafty,” “conniving,” “sneaky,” “cynical,” “irreverent,” “infectious,” “sly,” “malicious,” “zingy,” “amoral,” and “witty.” …

Undeterred by pouring rain, women from across the community came out on Thursday, March 24, for the Jewish Federation of Louisville’s Women’s Philanthropy event, Soul to Sole, with Jane Weitzman. Weitzman share her passion for JDC’s (the American Jewish Joint …