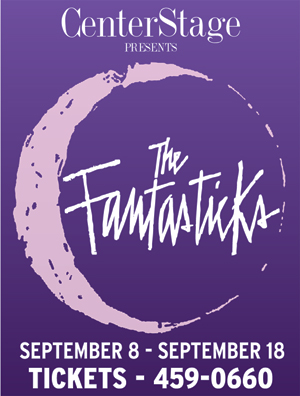 With its production of The Fantasticks, a new star has emerged for CenterStage. Kyle Braun’s fresh-faced portrayal of The Boy captured the character’s sweet naiveté. With a bright smile and eyes shining with youthful enthusiasm, he and The Girl (Mera Kathryn Corlett) seemed like a 20th century Romeo and Juliet – head over heals in love, but kept apart by a family feud.

The audience soon learns that their fathers aren’t really feuding, but scheming to get the young lovers together by feigning irreconcilable differences. Once their mission is accomplished, they must scheme to bring the feud to an end in without their offspring catching on to the plot.

It was really the music that carried the night. Cathy Ryan on piano and Rosanna Thompson on harp delivered exquisite performances that enhanced the wonderful singing by Braun, Corlett and company.
Jordan Ryan Price (El Gallo) rose to the challenge of the actor-for-hire faux villain.

Next up for CenterStage: Little Shop of Horrors, which opens October 27.