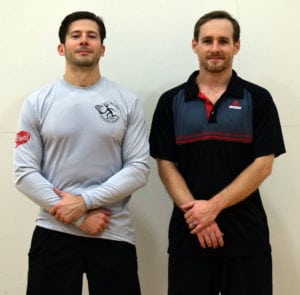 The left and right handed duo of Dan Case and Nick Stover proved to be too much for the competition as they won the annual Ike and Bruce Gumer Racquetball Tournament on Sunday, December 10.

Case is the number one ranked player in Kentucky according to Howard Kaplin, a tournament organizer. It was his second victory in a row, winning last year’s competition with David Fleischaker. During the annual dinner, Case was awarded “Fly Spirit Award.” Fleischaker’s recent passing inspired the award to showcase a person with David’s passion and ambassadorship for the game.

“He is always willing to step on to the court with anyone and shows a true love of the game and competition,” said Kaplin.

The annual tournament was started by the Gumer and Skolnick families in honor of Ike Gumer, a member of the National Racquetball Hall of Fame and Bruce Gumer, Ike’s son and an avid racquetball player at The J.

Last year, over 450 people gathered to celebrate The J’s 125th anniversary.  Since then, we’ve received such heartfelt feedback about how nice it was catching up with old friends and meeting new members of our growing community and how lovely …

It is hard to believe that Chanukah is already here once again. I hope you all are finding the time to spend with those in your life who mean the most to you. This time of year brings about the …