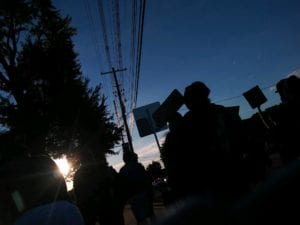 (Editor’s note: This is a developing story, which will be updated as events warrant.)

Jews joined thousands of other Louisvillians this past weekend, protesting the violent deaths of Breonna Taylor, shot by police in her own home, of George Floyd, killed beneath the knee of a Minneapolis police officer, and of Ahmaud Arbery, gunned down in Georgia while out for a jog.
They say they are out there because Judaism teaches it.
“I think it’s my responsibility,” said Avery Kolers, who has been to two protests so far. “I think Jewish tradition teaches … that when someone is treated inequitably, then it’s the responsibility of everyone to affirm the full equality of each other. How do I affirm that?  By being there when asked to be there to affirm it.”
Thousands of people, outraged by the killings, have taken to the streets in cities across the country. In most cases, according to media reports, the demonstrations have been peaceful. In many others, though, they have resulted in looting and shootings and injuries to police and protesters alike. Several reporters have also been injured, and even arrested.
The protests show no sign of abating.
The Jewish Federation of Louisville released a statement Sunday decrying the “sad history of treatment” African Americans have experienced from police and calling for action in the wake of the shootings.
The Federation called for:

“We must all embody the values for which we (as Jews) advocate by deepening relationships on a personal level with people of different backgrounds, the statement says. “Not only will our own lives be enriched, but we will become better and more impactful allies and partners. (Click here to read the complete statement.)
Jewish Louisvillians were present for the protests here this past weekend.
Kolers, professor and interim chair of the Department of Philosophy at the University of Louisville, said the demonstrations where he took part were peaceful.
“One hundred percent,” said Kolers, a University of Louisville professor of sociology. “On Friday (downtown), there was not one police officer anywhere to be seen while I was there.”
On Saturday (on Bardstown Road), he said the police were pushing the crowd in the direction of downtown, “which was really disturbing.”
But aside from protestors brandishing signs at the officers, including one that said “Justice for Breonna Taylor,” he saw no violence on the crowd’s part. Instead, he said he saw demonstrators trying to give each other chances to speak and handing out water.
For Asaf Angermann, the timing of these demonstrations is oddly coincidental. The visiting professor of philosophy and Jewish thought at the University of Louisville gave a virtual lecture to The Temple on May 28, which he had been working on for weeks: The title? “Is Racial Justice a Jewish Matter?”
Short answer, he said: It is.
“It’s not only a Jewish matter because Jews are commanded to pursue justice, and the current situation makes racial justice as urgent as ever, but also because of the historical relationship between Jews and blacks,” Angermann said. Each community, he noted, has learned much from the other, facing similar dangers and “fighting a shared fight against racism and discrimination.”
“The current situation of racial injustice and the rise of white supremacy makes it an even more practical and pressing responsibility for Jews to take part in the protests.”
So he did. He was at the Friday protest at the courthouse and at a Sunday healing ceremony by the Louisville chapter of Black Lives Matter outside the Yum Center. The speakers there were all people of color, he said, but the crowd was “very diverse.
Yehuda Jai Husband has not been at the protests (he just became a father), but for the black-Jewish Louisvillian, the eruption of demonstrations nationwide comes as no surprise to him.
“It’s been in plain sight for so long,” he said. “It’s been a powder keg.”
Still, something is different this time, Husband said: “a sense of solidarity” from the people on the streets.
“There are so many people who are making noise and not being the silent majority and complicit in silence,” he said. “That’s been one of the encouraging things, a silver lining.”
He’s also been heartened that members of Adath Jeshurun, where he worships, have been calling him since the protests began, “just to give me a place to vent.”
Husband doesn’t think the protests are over. Further he fears some people will use the violence to justify “authoritarian leanings.”
“I hope people can get out in front of this with a  message of nonviolent protest, so there’s this urgency to go vote, but I don’t think it (the protests) has run its course.”
“Racism hasn’t run its course,” he added.
Kollers expects the protests to continue. “There’s no reason they should dissipate,” he said. “Certainly no one is talking about it … they’re talking about staying until there is justice.”

By Lee Chottiner Community Editor No Jews have been elected to the Kentucky General Assembly since 2013. Are they missed? It’s an open question whether Jewish representation in state legislatures is relevant in the 21st century, when organized religion is …