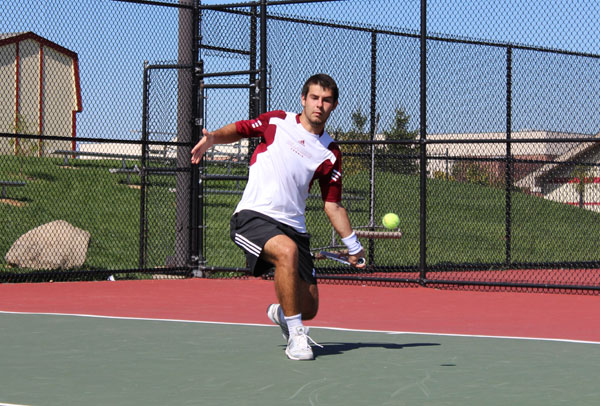 It is impressive enough that Bellarmine University junior Anton Rabinov is the highest ranked tennis player in the school’s history – he is ranked number two in the Midwest Region by the Intercollegiate Tennis Association (ITA) – but the student athlete excels off the court, too. Last semester he earned all A’s with the exception of one A minus for a cumulative GPA of 3.75.

Setting the record for most wins in a season for Bellarmine last year (fall 2011 and spring 2012), Rabinov had 43 total wins in doubles and singles including tournaments and dual matches.
This “high tennis IQ” is what Coach John Mican calls his greatest athletic strength. “His quickness is combined with anticipation so that he is always in the right spot at all times. Because of this, his shots are never rushed.”

Rabinov, a native of Petah Tikva, Israel, was recruited to play college tennis at the University of North Florida on the strength of his high school playing, which the coaches viewed by video. He transferred to Bellarmine in 2011 on the urging of a friend, Igal Mostkov. The two practiced together in Israel at Ramat HaSharon Tennis Center before Mostkov moved to Canada and eventually to Louisville to attend Bellarmine.

Rabinov’s family emigrated to Israel in 1993 from Ukraine when he was three years old. “My parents were afraid that they might be affected by the wave of aggression against the Jewish people and they didn’t want us (their kids) to grow up in an environment like this. So they weren’t persecuted but there was a lot of violence directed towards Jewish people at the time which made my parents fear for their safety,” he recalls.

His father, Vladislav, an IT expert, had relatives in Israel. His mother’s family still lives in Ukraine.

“I could speak English before I learned Hebrew because my mother insisted we have lessons. At school, English is required, but my parents speak Russian at home,” he said.

“Growing up, most of our Jewish identity came during the holidays, which we enjoyed celebrating,” he said. “It wasn’t really due to religious reasons but more of a social gathering of the family to sit and enjoy a nice dinner.”

The family first settled in Sderot, located less than a mile from Gaza, but frequent rocket attacks in the area caused them to move to Petah Tikva, which is very near to Tel Aviv.

Besides his father and his mother, Victoria, an elementary school teacher, Rabinov has a 23-year-old brother, Ilya, who is serving in the Israeli military.

“I spent most of my life in Israel and I love the country,” said Rabinov. “I enjoy the weather and I enjoy the people, and most important I have my friends and family back there. So it is important for me to go back, but as long as I am here I am going to try and achieve what I came here for.”

Majoring in economics with a minor in business, Rabinov will graduate in December 2013.

“I’m hoping to get a good college degree and hopefully get a few years of experience in the job here,” he explains. “My degree alone might not be sufficient to find the right job.”

“In high school, tennis came first. My grades were not as good then,” said the 21-year-old Rabinov.

Going to movies with friends and watching televised tennis and soccer occupy what little free time he has.

Rabinov’s daily routine includes morning workouts plus tennis practice after class, sometimes lasting until after 11 p.m. The college tennis season runs from February through April, or mid-May if the team makes the nationals. As the number one player on the Bellarmine team of 14 players, Rabinov is interested in seeing the entire team improve as they begin the spring season. Bellarmine is not currently ranked in Division II Tennis.

“(Anton) has an infectious sense of humor and he backs up the confidence he exudes by giving his all,” said Coach Mican. “He has great belief in his ability and while he doesn’t overpower his opponents he usually grinds them into submission, thus his nickname ‘the grindmaster.’ ”

Last fall, Rabinov won 10 out of 11 singles matches, losing only once in the championship match of the ITA Midwest regional tournament. Partnered with Mostkov, he won the Centre College invitational tournament number one doubles flight.

Rabinov said he didn’t know much about the Louisville area until he arrived. “I didn’t know what to expect. I’d heard of KFC, of course,” he said, “but I like this place very much.”

When asked who is his favorite tennis player Rabinov quickly answers with a smile, “Rafael Nadal. I’ve been told that I look like him. He’s hardworking and never gives up. Yes, I hope I am like him.”

How many bluegrass musicians does it take to change a light bulb? Three. One to change it and the other two to argue about how Bill Monroe would have done it. On Sunday, March 3, a new kind of Jewish …

by Shiela Steinman Wallace and Kim Toebbe If your total food budget for the week were just $31.50 per person, the amount the average Food Stamp recipient receives, how would you fare? The answer for the more than 20 people …