The Jewish Community of Louisville’s prestigious Blanche B. Ottenheimer Award is presented annually to an individual who has had significant impact for good in Louisville and often throughout the state and beyond. It recognizes a lifetime of achievement in pursuit of social justice.

The 2016 Ottenheimer Award will go to Rabbi Chester B. Diamond, and it will be presented at the Jewish Community
of Louisville’s Annual Meeting on Wednesday, June 15, at 6:45 p.m. at The J.

Becoming a rabbi was not always part of Rabbi Diamond’s plans. “I was in the Air Force after graduating from Brooklyn College, and I wasnít sure what I was going to do,” he explained. “I had no Jewish education.” 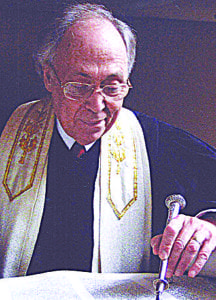 He had grown up in Brooklyn where most of his neighbors were Jewish and schools and many businesses closed for the Jewish holidays. Rabbi Diamond’s family wasn’t religious and didn’t belong to a congregation, he continued, “but since I was off from school, I would go to corner shul and listen to the sounds of the music, the chazzan and the prayers. I didn’t know Hebrew or the prayers, but they made impact on me.”

At age 9 or 10, he was given the Hebrew name, Tzuriel, God is my rock, and at age 13, he had a bar mitzvah. His bar mitzvah teacher was a cousin, a Conservative rabbi in Flatbush, who happened to be a classmate of Rabbi Dr. Herbert Waller, z”l, who later became Rabbi Diamond’s mentor.

While he was in the Air Force, he explained, “I asked the chaplain if he would teach me enough Hebrew to follow service.” The chaplain agreed and also allowed Rabbi Diamond to read his books. “I was so overwhelmed by the story of the Jewish people,” he said. “It gave me a wondrous feeling.”

Rabbi Diamond had been considering a career in the Air Force or microbiology, but thanks to the connection he made with the chaplain, he decided it would be wonderful to become a rabbi and teach all the things he was learning.

Rabbi Diamond was advised to apply to the Jewish Institute of Religion (JIR). When he talked with the dean, he shared his feelings about Judaism and teaching and his doubts about his lack of preparation. Rabbi Diamond said the dean replied, “What you’re saying is important, because I don’t care that you don’t have that background. We’ll give you that background, but I can tell what’s in your heart.”

He immersed himself in six weeks of intensive Hebrew and night classes in customs, ceremonies and Jewish history, and when it came time to apply for the seminary, he was accepted.

Rabbi Diamond earned a Bachelor of Hebrew Literature degree from Hebrew Union College-Jewish Institute of Religion in New York and a teaching certificate from the College-Institute School of Religious Education and the New York Federation of Reform Synagogues. He went on to earn his Masters in Hebrew Literature, with honors, and was ordained in 1963. He graduated first in his class and was awarded a three-year fellowship to the College-Institute in Cincinnati.

Sometimes things happen that seem to be bashert – destined to be. For Rabbi Diamond, it seemed to be bashert that he would wind up at The Temple. While Rabbi Diamond was at JIR, Dr. Waller was at Adath Israel in Louisville and employed graduate students as assistants, one of whom was Rabbi Diamond’s friend, Haskell Bernat.

When Bernat accepted a pulpit in Massachusetts, he called Rabbi Diamond and said, “I understand you’ve won a fellowship to study at Hebrew Union College in Cincinnati. You will hardly get any money for your fellowship. … I’ve got the sweetest assistantship you can imagine. I work for Dr. Waller, and now I’m leaving and there are six or seven rabbis who are being interviewed for the position. I would like it if you could get that position. So he arranged for a meeting with Dr. Waller and the search committee, … and the rest is history. This is my first pulpit, and I’ve been here now for 52 years.”

Although following his ordination, Rabbi Diamond intended to teach in college and Hebrew Union College eventually offered him a professorship, his work with Adath Israel changed his mind. He enjoyed working with Dr. Waller, and when the congregation offered him a full-time position, he accepted.

When he arrived in Louisville, he found the community to be very welcoming. Rabbi Solomon Roodman of Anshei Sfard and Rabbi J.J. Gittleman of Adath Jeshurun both reached out to him and invited him to speak at their congregations. This was a huge contrast from the experiences he had in New York where the Orthodox considered the Reform goyim (non-Jews) and wouldn’t even talk with them.

At one point, Rabbi Diamond was offered a position at the famous Central Synagogue in New York, but after consulting with Dr. Waller, he decided to stay in Louisville. “It was probably the smartest decision I ever made,” he said.

A highlight of Rabbi Diamond’s career came in 1975. Adath Israel decided it was time to move from Third Street to the East End where most of its members were. “I was talking with [Rabbi] Leonard Devine and found out Brith Sholom was planning on moving, too. I said, ‘Leonard, we ought to do it together and merge the congregations.'”

When the congregations first merged, they moved into the Brith Sholom building since Adath Israel had already sold its building. Dr. Waller, Rabbi Diamond and Rabbi Devine became co-rabbis of the new congregation.

Early in his rabbinate here, Rabbi Diamond discovered a significant lack of information about Judaism in the general community, so he started going out in the community to teach. He spoke at local seminaries and became an adjunct professor of religion at the Presbyterian Theological Seminary and a visiting lecturer in Hebrew Scriptures at Bellarmine University. He was also the first rabbi to serve as chaplain of the Louisville Jaycees.

During his years in Louisville, Rabbi Diamond has served on the executive boards of both Jewish and community organizations, including the Louisville Board of Rabbis and Cantors, Jewish Hospital, the Jewish Community Federation, the Boy Scouts of America, the National Conference of Christians and Jews, the American Jewish Committee, Council on Peacemaking, Senior House, the Jefferson Alcohol and Drug Abuse Center, the Louisville Free Public Library Foundation, Apple Patch Community for Mentally Handicapped Adults, and the Louisville and Jefferson County Youth Orchestra. He was a member of Citizens for Better Judges and for†several years he was a volunteer tutor in the reading program at Dunn Elementary School.

Rabbi Diamond was the first rabbi to serve on the Board of the Office of Ecumenism of the Louisville Archdiocese. In 1999 he was recognized by Interfaith Paths to Peace for his work in promoting interfaith understanding and in 2001 was the recipient of the Lifetime Achievement Award by the Cathedral Heritage Foundation.

Blanche B. Ottenheimer Award
Blanche B. Ottenheimer was a dedicated and effective figure in the social development of the community. Working through a variety of organizations, she was an activist for non-partisan political reform, civil rights and social justice. She was largely responsible for Louisville’s Model Voter Registration Law and other innovations in the secular life of this city and county leading to curbing corruption and restricting boss-rule, and clean elections. She conceived and founded the Louisville Conference of Jewish Women’s Organization; she was one of the first women to serve on the Board member of the Y.M.H.A. (later Jewish Community Center).

Some of the information for this story came from a story in Community written by Phyllis Shaikun when Rabbi Diamond became rabbi emeritus in 2001.

“You don’t see any tears but they are inside.” Happy tears that is. That’s what one thankful man said when Dr. Diane Afoumado found his original birth certificate from the concentration camp where he was born. Every day, every second …

Who says only children can go to summer camp? Just because you’re adults and parents doesn’t mean you can’t sit around a bonfire and make s’mores like the good ole days, right? Join The J on Saturday, August 20, from …

For the parents of three children, Kristen and Bryan Yoffe, choosing summer camps could be scary. There’s eight-year-old Owen who loves basketball camps. And then there’s four-year-old Claire and her deaf twin sister, Elizabeth; both of whom love to swim. …