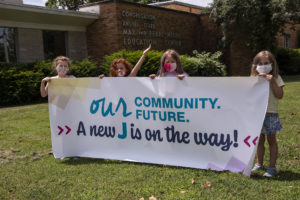 Campers from Camp J hold a sign signaling changes are starting to happen for the future JCC campus. This month, demolition crews razed the first of two houses on Dutchmans Lane that were acquired in the Anshei Sfard purchase, making way for an access road for construction vehicles. Groundbreaking on the actual site of the JCC will be held later this year. (Community photo Robbyn McClain)

While finding its new normal, the Jewish Community Center is showing signs of positive change.
A vacant lot now sits along Dutchmans Lane, where just a couple of days earlier, a house stood. Nothing unusual about that; demolition work happens all the time in Louisville. However, this demolition was special. It was the first physical sign that the multi-million-dollar project to build a new state-of-art Jewish Community Center is underway. When that lot, and the one next to it, are finally cleared, this will provide the contractor’s entrance to the construction site for the new JCC, which will be built at the back of the campus, site of the current athletic fields.
Over $38 million has been raised in major donor gifts, which gets the organization to 95 percent of the final total.
“This has surpassed expectations of our initial feasibility study and is a testament to the project, the timing, and the community support to make this a reality,” said Dr. Jeffrey Tuvlin, a Capital Campaign co-chair.
Tuvlin said the campaign has yet to enter its community phase, which he expects to move the drive past its goal. “We will look to our community very soon to take us over the finish line to complete the project.”
“Stay tuned,” he added. “We are incredibly proud that our initial phase has nearly 200 gifts exceeding projections and expectations. The healthiest sign I see moving into the community phase is that we have community members inquiring when we will ask them to participate.
JCL President and CEO Sara Klein Wagner said the community should be proud of the support the project is receiving from donors and stakeholders, despite the impact of the COVID-19 pandemic.
“We’re getting closer,” Wagner said. “The pandemic certainly caused a pause in our work, but not as much as people might think.”
In an interview with Community, Laurence Nibur, construction committee chair, stated that construction on the JCC will begin this year.
“We are proud to be working with Calhoun Construction who will shepherd the project to completion,” stated Nibur. GBBN Architects has also been with the project since the beginning.
“The original design of the building was thoughtful around multipurpose and flexible use of spaces organized to support JCL Mission activities, which will allow us to adjust to COVID conditions with very little revision,” Nibur said.
The “heart” of the project, as it’s called, remains the floor-to-ceiling glass entrance, a meet-and-greet area that leads to another feature of the building: “the Street.”
The Street will be an interior thoroughfare running the length of the building, connecting members to every section of the JCC. Parents can sit and watch their kids swim through panes of glass. The Street, Nibur said, will have a “coffee shop vibe.”
The rest of the building’s social section will include a large auditorium space, which can be divided into smaller units, handling large and small functions alike.
Health & Wellness, unlike the current JCC workout areas that are disconnected and do not offer an open flow, will have a new gym space that will be more unified, with a full indoor basketball court – there also will be an outdoor court – exercise and spin rooms and an elevated running track that will be larger than the current one. The workout rooms, equipment and free weights will all be on the same floor and accessible to the running track.
The Early Learning Center will have 12 classrooms and a private entrance with an outdoor courtyard for activities.
In addition, the Aquatic Center will include a six-lane, 25-meter indoor pool, a “zero-depth entry” children’s swim pool, a multi-story water slide, splash pad features and a diving area. The existing outdoor pools will remain.
“We’re trying to create something pretty awesome here,” Nibur said of the Aquatic Center.
Nibur credits the entire construction leadership team, which includes Craig Greenberg, volunteer and business leader/entrepreneur; and Chris Carmicle of PLC Management, who serves as the owner’s representative, for “stewarding” the project through to opening day.
The other Capital Campaign chairs – Madeline and Jerry Abramson, Barbara and Frank Weisberg – have brought relationships and fundraising experience that are critical to completing the task, according to Tuvlin.
“Fundraising can be inspiring and invigorating and so many people were honored to give to make this happen.”
The Capital Campaign committee has been the backbone of the project to this point, meeting several times each month and dedicating an incredible amount of personal time to share the vision of the project with donors.
Tuvlin, who had spent several years engaged in the JCC movement through his time on the national JCCA board, went on hiatus nationally to dedicate his time to the Louisville JCC project.
“Once we decided as a community that we were ‘in the JCC business,’ I knew I would have to be a part of the process,” he said.
Completed in 1955, the current JCC has served the community for over 65 years. Wagner said the estimated completion date for the new JCC –18 months from the date of groundbreaking – hasn’t changed.
“The JCC has shaped so many lives including my own. The community provided us a gift where so many have grown, learned, formed lifelong friendships and thrived. It is our turn to ensure generations to follow have the JCC become part of their lifelong story,” said Wagner.
“This is our collective future and I invite everyone to be part of it,” Wagner says.

By Lee Chottiner Community Editor Miracles still happen, according to the Rev. Joe Phelps – even when you least expect them. For instance, the retired cleric recently taught a four-week virtual class on white privilege for the Earth and Spirit …