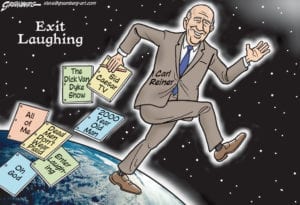 We took Carl Reiner for granted.
He was always there, writing, playing the straight man to Mel Brooks’ joke or acting as the foil for Dick van Dyke. He did it all with impeccable timing, a dapper physical presence and intelligence.
But humor was a survival mechanism for Reiner. Case in point, during the 2012 Alliance for Jewish Theatre Conference in Los Angeles, he told us a story about how he confronted anti-Semitism while in the Army:
There was a huge guy in his unit who hated Jews, Reiner recollected. Everything that was wrong with the world was because of Jews. Reiner would often respond quietly with jokes that sent the rest of the unit into hysterics. Finally, the anti-Semitic soldier couldn’t take it any longer. He demanded that the two fight it out, but the rest of the unit pulled them apart, saving Reiner from a beating. Eventually, his humor even pacified the anti-Semite.
Reiner truly believed that humor was not just a way to counter the threat of anti-Semitism; it could also build relationships.
His intelligence is not often recognized. The man steeped himself in world history, which was obvious in the genius of the routines he created with Mel Brooks for their “2000 Year Old Man” routine. My wife, Carol Ely, an American historian and now director of Historic Locust Grove in Louisville, met him when she was the education director at the Paul Revere Historical House in Boston. She didn’t know it was him when they first met, but she recalls how he asked so many questions about Revere’s unique life, things no one else thought to ask.
He brought that love of history back to his comedy. For example, this skit he did with Brooks as the kvetchy Jewish 2,000-year-old man being interviewed by Reiner:

Reiner:  Did you know Paul Revere?

Reiner (crying out): No! He said the British are coming.

Brooks: Oy, mein Gott! I got to write his wife a note. I thought he said the Yiddish are coming.

Of course, the audience erupted in laughter.
But the play-on-words joke was not just about the anti-Semitic fear that Jews were moving to WASP neighborhoods. Its complexity was how Jews carry that fear of anti-Semitism and outsider-ness in their cultural DNA. That was the intellect that he brought to his work.
Reiner believed that laughter is a way to bring people together and even, more – as an act rooted in our very existence. He and Brooks genuinely wanted to explore the human condition. Using their Jewish sensibilities of “laughter through tears,” he showed how it is a remedy to deal with the disease of anti-Semitism, racism, oppression and suffering. Zichron l’vracha – May his memory be for a blessing.

By Lee Chottiner Community Editor Keneseth Israel is surveying its members about reopening the synagogue before deciding if, when and how to do it. The congregation sent out a five-question survey to its members earlier this month to gauge their …

By Lee Chottiner Community Editor Miracles still happen, according to the Rev. Joe Phelps – even when you least expect them. For instance, the retired cleric recently taught a four-week virtual class on white privilege for the Earth and Spirit …