This is the second in a series of articles highlighting the stories behind the generous capital campaign donors who make up the Wall of Honor Tapestry of Giving at the Trager Family Jewish Community Center. 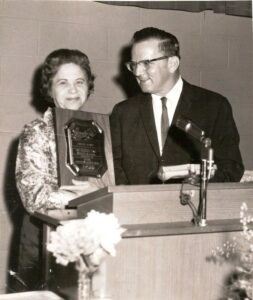 Even after she retired, Pauline lent her time and talent to the JCC and received the distinction of Volunteer of the Year.

Max Green will tell you that upon the suggestion of his cousin Jake Wishnia, he had no trouble gathering donations in memory of his Aunt Pauline Pearson for the Trager Family Jewish Community Center Capital Campaign. More than 25 people contributed to remember the lady who was the “heart and soul” of the JCC for more than 40 years. Many often referred to her as “Miss JCC” and she loved that, according to Green.

Pearson started her career in 1941 at the Y.M.H.A. and served several JCC presidents over her career at the place that felt like home to her. Green recalls, “Anytime a child would come into the JCC, she would give them a dime to buy candy. Without children of her own, she doted on my brother, Steve, and I and she so treasured the children who came into JCC.”

He adds, “Aunt Pauline was a fixture at the JCC. When you walked in the door, there she was at her typewriter.”

Always willing to lend a hand to others, she would give children rides to the JCC to help their parents. She was always involved in Jewish fundraisers, bingo and enjoyed playing MAH JONGG alongside her friend Annette Sagerman. “Aunt Pauline and Annette were fixtures at the JCC, and they loved it.” 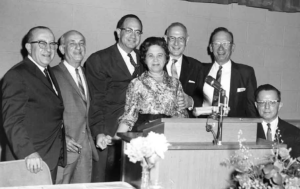 Green’s best friend and neighbor growing up, Gayle Glazer, loved living on the same street, Cawein Way in the Hikes Point area, near Pauline and shared these fond memories, “I loved Pauline, she was so good to us children. We would gather at her house, and she always made us feel so special. One time, she even took us to Bernheim Forest to collect leaves for a school project in middle school.”

We thank Max Green for sharing this story with us.