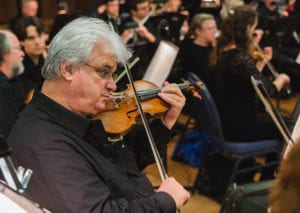 Violinist Scott Staidle watches the direction of Louisville Orchestra conductor Teddy Abrams during the performance of The Tempest during the opening of the Music Without Borders series at Adath Jeshurun. (Community photos by Jessica Budnick)

(Editor’s note: This version of the story  includes the sponsor of the concert, which was omitted from the print version.)

The opening concert for the 2019 Music Without Borders series ended with a bang.
OK, it ended with a bass drum and a few people pounding on buckets, but it sure sounded like a bang.
The Louisville Orchestra, performing the opening concert of the three-part series on Thursday, Jan. 17, at Adath Jeshurun, played three selections by Russian composer Pyotir Tchaikovsky, the final, and perhaps most famous being the “1812 Overture,” the headlining piece of the AJ performance.
Tchaikovsky intended the composition as a tribute to Russia’s victory over France during the Napoleonic Wars. As such, he actually included chimes to resemble church bells ringing – and a canon.
Firing a canon in a synagogue? Probably not going to happen, Music Director Teddy Abrams admitted to the capacity crowd.
“They’re a safety hazard and difficult to procure,” he quipped.
So the orchestra improvised, using a gigantic base drum and distributing buckets and drum sticks to the audience, Abrams cued them when to strike.
The show went on. 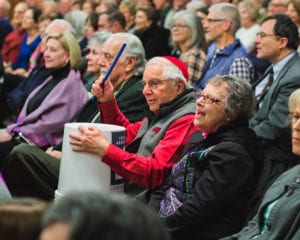 Members of the audience banged on buckets to simulate the sound of canons.

The 64-piece orchestra opened the performance with Tchaikovsky’s “Romeo and Juliet,” a piece many listeners found familiar, thanks to the love theme that has found its way into countless movies, TV shows and commercials. Tchaikovsky revised the piece three times to get the version that is performed today.
Next, the orchestra performed “The Tempest,” which, along with “Romeo and Juliet,” forms two-thirds of Tchaikovsky’s three-part series based on the plays of Shakespeare. (“Hamlet” is the third.) A piece not frequently performed, “The Tempest” is musically complex. In fact, Abrams had the French horn section take a special bow at its conclusion for “nailing all those crazy octaves he (Tchaikovsky) asked for.”
Now in its fifth season, Music Without Borders gets the Louisville Orchestra out of its concert hall and into the community.
Each concert in the series will be performed three times. The “1812 Overture” was also performed on Jan. 18 at St. Francis in the Fields and on Jan.19 at the Paul W. Ogle Cultural and Community Center.
The Sara and Adolf  van der Walde and Israel Rosenbloum Fund sponsored the performance.
The next concert will be “An Evening in Italy” on Feb 28 at The Temple, March 1 at St. Francis in the Fields and March 2 at the Ogle center.
The series will conclude with “William Tell” on April 11 at The Temple, April 12 at The Jeffersonian and April 14 at the Ogle center.