Jewish Family & Career Services’ Annual MOSAIC Awards is truly a highlight each year. This year’s event, held on May 26, upheld that tradition as the agency honored first generation Americans Dr. Emma Birks from Great Britain, Dr. Manuel Grimaldi from Spain, Oksana Masters from Ukraine, Dr. Thangam “Sam” Rangaswamy from India and Dr. Riaan van Zyl from South Africa for the significant contributions they have made to this community, the United States and the World.

WLKY’s Rick Van Hoose emceed the evening, which started with the presentation of the flags and an invocation by Rabbi Nadia Siritsky in which she asked that we learn from one another, be open to one another and be strengthened by awareness of the blessings we receive from diversity.

Dr. Birks is the director of the Heart Failure, Transplantation and Mechanical Circulatory Support Program at the University of Louisville and Jewish Hospital, KentuckyOne Health. She developed a myocardial recovery program and Ventrical Assist Devices and Transplant programs in Louisville. She is a teacher as well as a researcher.

As she accepted the award, she said she came to Louisville for the job, but stayed because of the people.

Dr. Manuel Grimaldi is certified in internal medicine and medical oncology and has won numerous accolades including the American Cancer Society Physician of the Year and the Leukemia and Lymphoma Society Award. Recently, he received the Lifetime Achievement Award from the American Cancer Society. Caring and compassionate, he is now retired and donates his time, knowledge and service on medical missions to Nicaragua and Belize.

Oksana Masters is a Paralympic star, excelling in rowing and many other sports. Originally from Ukraine, she was born without the main bones in her legs and with many other deformities and lived in an orphanage until age seven when Gay Masters adopted her. She endured surgeries, amputations, hunger and physical abuse prior to her adoption. She has a zest for life and finds sports to be healing.
Masters was unable to attend the MOSAICS, so her mother accepted the award for her.

Dr. Rangaswamy credits his father’s work ethic with shaping his own. He is the president and principal engineer of Rangaswamy & Associates, Inc., which he started after receiving his Ph.D. in Engineering from the University of Kentucky. He teaches at the University of Louisville’s Speed School and founded the Structural Engineering Association of Kentucky, which he served as president, director and secretary. He has also served as the Kentucky Minority Business Development Council treasurer, secretary and Board member. He’s a member of several boards and was a founding trustee involved in the building and opening of the Hindu Temple of Kentucky and more.

Dr. Rangaswamy first came to Kentucky in winter, a season he had never experienced before. When he arrived he thought the trees and grass were dead and Kentucky must be a desert. He soon learned differently and decided that Louisville’s people were friendly and helpful.

Dr. van Zyl grew up in South Africa during apartheid and worked as a probation officer before working with Nelson Mandela to reform the prison system. He helped South Africa build an integrated society. He also developed programs for those with epilepsy. Today his research is in the area of prevention of HIV/AIDS in Africa. He came to Louisville to work at UofL where today he is the associate dean for research at the Kent School of Social Work.

Through the MOSAIC Awards, he said, JFCS is building a vibrant community.

Each year, the Jeff and Phyllis Osbourn Scholarship is presented to an immigrant or refugee pursuing a career in nursing or some other high-demand health care field. This year, the scholarship went to Mustapha Kanneh, an immigrant from Liberia who has a BS degree in Biology from the University of Liberia and a MS in Public Health from Cuttington University.

Kanneh’s mother died in childbirth when he was young, and as he worked in public health in Liberia, he realized how poor the health care system in his country is. He is now studying nursing so he can go back to Liberia and make a real difference in the country’s health care.

The actual MOSAIC Awards are beautiful pieces of art crafted by a different artist each year. This year’s awards were created by Jerry Maxey, who is known for creating unique wood baskets. 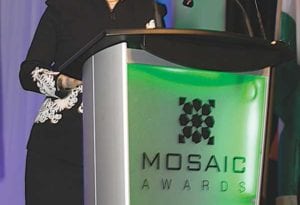 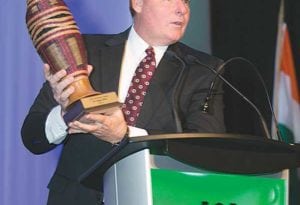 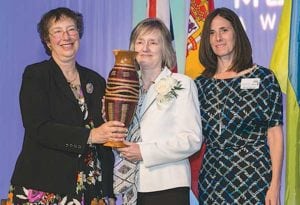 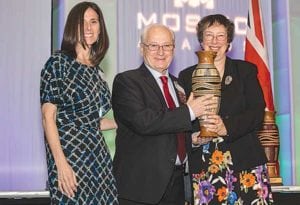 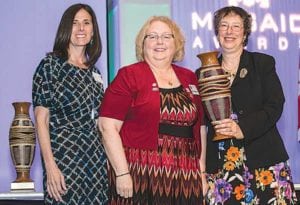 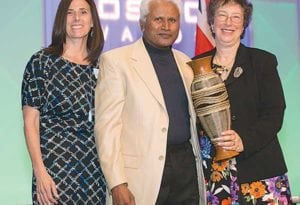 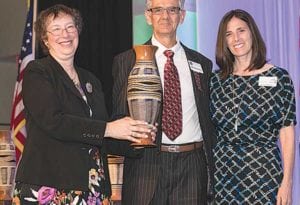 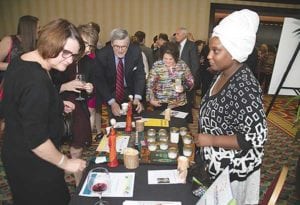 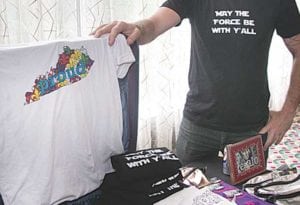 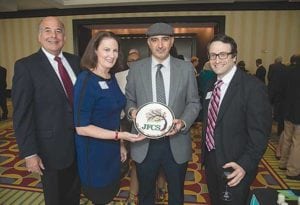 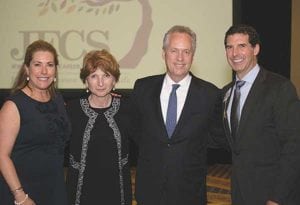 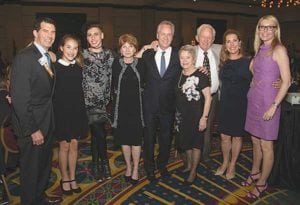 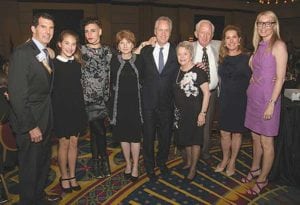