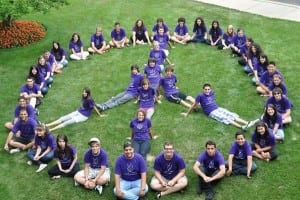 If you were asked to assess the prospects of peace between Israel and the Palestinians, it is likely that you would be less than optimistic; after all the news is full of reports of violence and hatred from the region.

Or maybe not. Maybe. Just maybe. If individual Israelis – Arabs and Jews – and Palestinians sat down and talked. Maybe if they got to know each other personally. Then, perhaps, it would be possible to plant the seeds of peace.

That’s exactly what Hands of Peace does, and the site director of the HOP program in San Diego, CA, is Louisville native Scott Silk.

A lawyer by trade and a teacher at Pacific Ridge High School, Silk was a facilitator for the program at its original Chicago location for six years, and in 2014 he opened the second site in California. In addition, he takes his students on a biennial dual narrative trip to Israel and Palestine, enabling them to learn the story of the conflict from both points of view.

Hands of Peace describes itself on its website as “an interfaith organization developing peace building and leadership skills in Israeli, Palestinian and American teens through the power of dialogue and personal relations.

“The goal of HOP is to empower young leaders who can be the problem-solvers of the future.”

Silk got involved with the program when he lived in Chicago. With his background in law, teaching and mediation, the HOP program seemed like a natural fit. When he first moved to San Diego, he returned to Chicago each summer to continue his work with the program. “My goal,” he said, “is to reach as many kids as possible.”

Today, as the site director in San Diego, Silk is involved in every part of the program from fundraising to programming, outreach to public speaking and managing the team locally.

“The crux of the program is dialogue,” he said. HOP brings young people from the three Middle East communities described above to the U.S., where “they meet up with American kids from all backgrounds.”

The four delegations start each day with an intensive, facilitated two-and-a-half hour dialogue that is both structured and spontaneous, during which they get to know each other as individuals and learn about each other’s culture. As the program progresses, the discussions move to the conflict, how the conflict impacts their lives and what will they do when they go home.

It is during the third phase, when the participants discuss how the conflict impacts their lives, where Silk sees big changes. The discussions, he explained, bring human understanding.

Afternoons and evenings are filled with a variety of other programming, from the serious to the whimsical. The participants attend Christian, Muslim and Jewish services and meet the clergy of each faith. They also hear from Azim Khamisa, a world renowned nonviolence trainer who has suffered loss at the hands of violence himself.

During the second year of the HOP program, participants learn community organizing skills and plan and implement a simulated action. During this year’s program, which is currently underway and runs through July 28, they will address landlord negligence issues. In a visit to the Mexican border, they were joined by students from Tijuana and some recent Mexican immigrants. After a tour, they dialogued with the Mexican participants, talking about barriers and borders in all their lives and comparing the issues that divide San Diego from Tijuana to those that divide Israel and the West Bank and Gaza.

Other activities included a portrait workshop, during which participants had to paint or draw someone from another delegation, and as well as an outing to the San Diego Zoo, soccer games, drama activities and more.

The HOP program will conclude with a huge farewell reception to which members of the outside community are invited. Participants prepare dishes from their own cultures and share them with 300 people. They also share the videos they made during the course of the program.

This summer HOP California has 27 participants. The program will continue throughout the year with quarterly seminars run by the Hands of Peace Middle East staff. “The kids continue the dialogue and conduct outreach in their communities,” he explained. “They visit sensitive sites from Yad Vashem, Israel’s Holocaust memorial museum, to a settlement to a refugee camp, and in those places, they have to grapple with the reality of the conflict from different points of view.”

Hands of Peace is also in the process of instituting a new leadership program, through which participants will develop and lead their own service projects with the goal of developing solutions to problems.

The HOP program has anecdotal evidence of it success. Many alumni have gone on to study Middle East relations, Silk reported. Some have become diplomats or work in conflict resolution. Some have started their own nonprofit organizations. They’ve written books, gone into teaching and are serving as translators.
There are also many smaller stories of success.

Silk has a bachelor’s degree in political science from the University of Michigan and a JD from Denver University. He decided he didn’t want to practice law, so he trained as a mediator and earned an MA at DePaul. He is now in his 14th year teaching, combining mediation and conflict resolution.
He and his wife, Karin, have two sons, Jake and Sam.

Growing up in Louisville, he attended St. Francis High School, was a member of The Temple and was active in both The Temple’s youth group and Pi AZA. More information about Hands of Peace can be found at handsofpeace.org.

In the weeks and months following 9/11, the Bush administration launched what it named the “War on Terror” against militant Islam. With the realization that the West was doing battle not with a particular nation-state, but a world-wide terror network, …

CenterStage, with the generous support of title sponsor, Hilliard Lyons, will turn up the heat as Dolly Parton’s brand spankin’ new musical, 9to5: The Musical sizzles onto the stage. Based on the hilarious blockbuster 1980s film, “9to5: The Musical” follows …

The Jewish Education Service of North America (JESNA) made the difficult decision to cease its program operations in 2013; however the agency held its final Board meeting in New York last month. Why such a long gap? JESNA Board Chair …