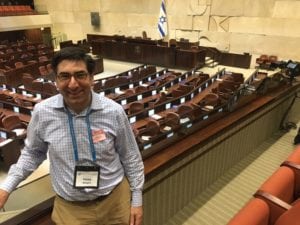 Corey Shapiro, seen here in the Israeli Knesset (parliament), visited Israel on a Frank Family Fellowship mission this past December. He was in the country when President Donald Trump recognized Jerusalem as the capital of the Jewish state. (photo provided by Corey Shapiro)

As Eli Waxman, an Israeli physicist, professor at the Weizmann Institute of Science and advisor to the prime minister, stood in a Jerusalem bistro explaining the workings of the Iran nuclear arms agreement, it became apparent that his audience was distracted.
No matter how important his talk was, he was being preempted by something bigger. Halfway around the world, President Donald Trump was recognizing Jerusalem as Israel’s capital.
One face in the crowd, Louisville attorney Corey Shapiro, watched the scene unfold, struck by how everyone was trying to listen to Waxman while following events seven time zones away.
“People were on their phones, trying to be polite to the professor while the president is making this historic announcement,” he recalled.
It was one of the more memorable moments that Shapiro and 12 other newly minted Frank Family Fellows of the Jewish Council for Public Affairs (JCPA) had on their recent 10-day mission to Poland and Israel.
The fellowship recognizes young Jewish leaders who are considered rising stars in their local Jewish Community Relations Councils (Shapiro sits on Louisville’s JCRC). The JCPA is the umbrella organization for such panels.
“It was not a tourist trip,” Shapiro said of the mission, which lasted from November 29 to December 8. “Yes, we got to see historic sites, but this was an educational experience. I couldn’t have learned so much in so short a time in any other setting.”
Yet no one imagined a surprise like this, or how it might affect the mission.
One day after Trump’s announcement, a planned visit to Ramallah for a visit with Palestinian leaders was canceled.
So was a scheduled visit to the Western Wall, though Shapiro and other Frank Fellows went to the Old City anyway – on their own time.
“We saw no signs of violence,” Shapiro said. “We saw what, to me, seemed like normal Friday afternoon activity.”
While the Ramallah visit didn’t happen, one official – Walid Issa, executive director of The America-Palestinian Hope Project – did cross the Green Line to meet the Frank Fellows. He told them Jews and Palestinians can live peacefully together, but they must adjust their thinking.
“His message was both sides rely too heavily on symbols to define victories or defeats,” Shapiro said. For Israel, he said, one symbol is the BDS movement (boycott, divestment, sanctions). For Palestinians, like himself, symbols took the form of physical items such as the key to Issa’s family house inside the Green Line, which his grandfather bequeathed.
“He (Issa) does not see the need to go back to that house,” Shapiro said. “The key is just something his grandfather gave him.”
Jerusalem and the peace process were two of many issues the fellows saw play out in Israel. They also visited the Golan Heights and went to a hospital where Israeli providers treat patients from war-torn Syria.
In Tel Aviv, they met with officials from advocacy and legal service groups trying to assist refugees and migrants from other countries who are trying to remain in Israel – a simmering issue in light of the government’s recent announcement that about 40,000 Africans who entered Israel before construction of a southern border barrier must accept a deportation offer – cash and a plane ticket – or face jail.
The group met with Israeli leaders of AJC, the Anti-Defamation League, National Council of Jewish Women and Women Wage Peace. They also met with Orly Erez-Likhovski, deputy legal director of the Israel Religious Act Center, who has argued successfully in Israeli courts for an end to gender segregation on public transportation and the Orthodox monopoly on state-funded salaries to rabbis, as well as state funding for the construction of non-Orthodox synagogues.
Shapiro said he was struck by how Israel is facing many of the same domestic issues – e.g., immigration – as the United States.
On the Poland leg of the trip, the Frank Fellows were in Warsaw, where they toured the Jewish ghetto and visited the new Polin Museum of the History of Polish Jews. They also went to Auschwitz and Krakow.
As for Waxman, the physicist whose talk competed with Trump’s announcement, Shapiro said the professor reinforced his support for the agreement by providing more detail about how it works.
“[He said] this is a deal that achieves what it set out to accomplish. He reassured me that entering the deal was the right things to do, and we should work to make sure this deal remains in place.”