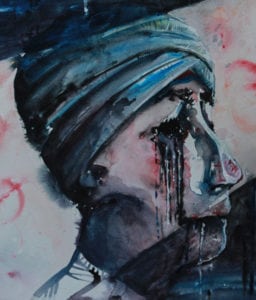 An example of the artwork used in “Kultar’s Mime.” The play employs paintings, poetry and music, as well as the spoken word, to tell its story of sectarian violence. (photo provided by Sarbpreet Singh)

For two days in April 1903, armed gangs, stoked by blood libel lies, swept through Jewish neighborhoods in the Russian city of Kishinev.

The Jews tried to defend themselves with farm implements and whatever else they could find. In the end, though, 49 people were killed, hundreds more were injured, women were raped, and homes and shops were looted.

The Kishinev Pogroms, which prompted a mass exodus of Jews from tsarist Russia, would be remembered as the perhaps the worst of the 20th century – until the Holocaust.

The Delhi Massacre, rightly so, has also been called a pogrom.

Both tragedies have been brought together in a theatrical statement against sectarian violence: the play Kultar’s Mime, which is coming to Louisville for one performance, Sunday, April 2, 2:30 p.m., at the Unity Church of Louisville – the old Adath Jeshurun synagogue – 757 S. Brook St.

The play is about a collective of young Jewish artists who decide to commemorate a Kishinev Pogroms. In doing so, they learn about the Delhi Massacre.

“In a powerful moment, they decide they want to honor the suffering of their forebears by focusing on the pain of other victims who suffered under similar circumstances,” said Sarbpreet Singh, a Boston-based writer and commentator who co-wrote the play with his daughter. “They are moved by the fact that the Delhi Massacre is really unknown in the world.”

But Singh knows its history only too well. He was an engineering student in India in 1984 when the massacre happened, and he recalls how the government and the media falsely described it as a riot.

He didn’t learn the truth until he came to the United States and discovered that the riots were actually orchestrated – and brutal – attacks on Sikhs.

An anthropologist, who made a study of the children who survived, described one boy, a deaf mute, who could only act out what he had seen (his name is the title of the play), while a girl who saw her father doused with gasoline and set on fire clung to his hand until the last possible moment. 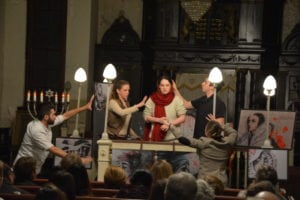 Among the many venues for “Kultar’s Mime” was the historic Vilna Shul in Boston. (photo provided by Sarbpreet Singh)

These stories inspired Singh to write a poem of the same title, which his daughter, J. Mehr Kaur, who studied theater at Smith College, would later turn into a play.

Kultar’s Mime uses an artistic marriage of painting, theater, music and poetry to tell its story, including “The City of Slaughter,” a poem about the Kishinev Pogroms by Hayyim Nahman Bialik.

In fact, it was BiaIik’s poem that inspired Singh to incorporate Kishinev into the play, and to make the artists to Jews.

“I was struck by the similarity of “The city of Slaughter” and my poem,” he said. “In both works, the author acts almost as a tour guide, bringing in the observer and showing them what had happened.”

The play has developed a following among Jews.

“We’ve performed at the JCC in Toronto, the JCC in Vancouver, and we have performed inside the Vilna Shul, which is the oldest synagogue in Boston,” Singh said. “When we were at Hofstra University, the discussion after the play was moderated by professors from the Sikh studies and Jewish studies departments. By and large, we have Jewish audiences at many performances, and the response has been no different.”

But what gratifies Singh even more is the reception the play received when he took it to India, a land where the massacre is still a taboo subject for many people.

“We went to India twice and we presented in all the major cities to much trepidation,” he recalled. “Contrary to my expectations the play was embraced. It was written up in every major newspaper in India, and the overwhelming response of the audiences was really positive and full of empathy, especially among the young people who had never heard of the massacre because no one ever talks about it. Their response was humbling and mind-boggling, and it was such an incredible response to receive.”

The play, which also will also be staged this weekend in Cincinnati and Lexington, is coming to Louisville with the help of Dennis Stork, a local Sikh who lined up the Unity Church as the venue.

“It doesn’t take a lot of props,” Stork said of the production. “It can pretty much be done on a bare stage.”

When Kultar’s Mime opened in 2013 at Hopkinton, MA, Singh hoped it would run for at least five performances. Today, it has been staged more than 75 times ­­– in the United States, Canada, Great Britain, India and Malaysia – to 15,000 people.

Their responses, he said, have been gratifying.

“At the end of the day, our pain is the same regardless of who is suffering and who the perpetrator is,” he said, “and this is something the audience has picked up on over and over again.”

“We really need to care about each other’s pain; that’s the only way to stop this from happening,” he added. “That’s something I have heard over and over again as we have traveled all over the world.”

Admission to Kultar’s Mime is free. Register at eventbrite.com.

In addition to the local Sikh sangat (“congregation” in Punjabi), Stork anticipates the play will appeal to Jews here.

“I think it will play well,” he said. “Louisville has one of the larger Jewish communities in the region and I think it will generate a lot of interest just because of that.”

“Wherever they have gone, we have reached out to the Jewish community,” he said. “It’s brought about an heightened awareness of the Sikhs wherever we have tried to engage.”