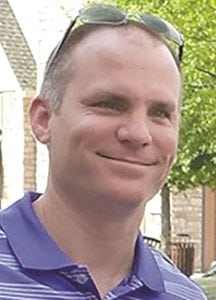 Tabler, a Louisville native started his career in sports. He earned a masters degree in sports administration with the intention of getting into golf and worked as an assistant golf pro for a couple of years. While he was working on his masters, he took an internship at Slugger Field working for the Bats, where he helped with maintenance, doing whatever was required.

In 2009, he was offered the opportunity to come to The J, and he’s been here ever since. His career turn from golf to maintenance was unexpected, but Tabler is happy about it. Coming to The J enabled him to fulfill his dream of having a building of his own to care for. “This building is older than Slugger Field,” he said, “and it has a lot of challenges,” but he is up to them.

“I love seeing new projects come together,” he said, like the renovation of the locker rooms and the new entrance including the ramps. “I love doing projects and watching people experience the new part of the facility,” he said.

Taking care of an older building can be frustrating, he admits. Since the elements are old, even things that should be simple sometimes become major undertakings, “but we always find a way to get things done.”

Tabler insists that this award really should be for his entire department because he could not do the job alone. He named Larry Bischoff, who retired in March, Billy Chandler and John Dillon. “I’ve learned more from them than they learned from me,” he asserted. “They’ve saved us tons of money over the years.

“If it weren’t for them,” he added, I wouldn’t be here.” He wants to be sure they also receive the recognition they are due. “They keep me afloat,” he said, “and if I’m not here, I know I can rely on them. They’re always just a phone call away and they come in at all hours” – whenever they’re needed.

Tabler and his wife, Julie, have two children, Andrew, 2-1/2, and Kennedy, two months, so he spends as much time as he can with them.

He loves the outdoors. In addition to golf, he enjoys hiking in the mountains. An avid sports fan, his teams are St. Louis in baseball and the University of Kentucky for basketball. He also enjoys metal detecting and reading.

When he was told of the award, Tabler was really surprised. He knows some of the prior recipients and is honored to be counted among them. He’s also gratified to know that “people do realize and see the things that go on behind the scenes.”

The Kling Award includes a stipend that will enable Tabler to take some training to learn some new skills.

Arthur S. Kling Award
The Kling Award honors the memory of Arthur S. Kling who was a prominent leader in the Jewish community, serving as president of the Young Men’s Hebrew Association (YMHA), the predecessor of the JCC, and many of its committees. He was among the leaders instrumental in establishing the JCC on Dutchmans Lane. He was also instrumental in establishing the Bureau of Jewish Education and the Conference of Jewish Organizations, which ran the United Jewish Campaign.

BBYO Senior Dinner On May 20, Mike Steklof had the seniors of Louisville BBYO over to his house for Shabbat Dinner. The seniors spent time reminiscing about BBYO and discussing their plans for the summer and next year. Jay Levine …

The 2016 Stacy Marks Nisenbaum Award will go to Laina Meyerowitz, who is currently BBYO’s Kentucky-Indiana-Ohio Regional Board president and an active member of Louisville’s Jay Levine BBG. The award will be presented at the Jewish Community of Louisville’s Annual …