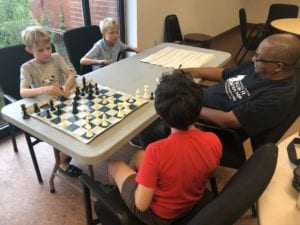 Corban Seavers learned to play chess with one of the best players he knew – his father.
“He didn’t just throw a board in front of me and have the pieces there,” Seavers recalled. “He taught me about opening strategy. He taught me about tactics, and he taught me about the features of every piece.”
In other words, Seavers’ father taught him how to win.
Now, Seavers is passing those lessons on to young competitors at The J – as chess coach Check Mates chess team. They have already started playing in events.
But the word “team” doesn’t adequately describe the Check Mates. They’re also a club since the kids get together after school for something they enjoy.
They’re a class because they are learning the game.
And they’re a team because they compete.
Over the summer, Camp J offered a chess camp, taught by Seavers, director of the West Louisville Chess Club, who also teaches after-school chess classes in the Jefferson County Public Schools. Seavers approached The J about offering further chess study as part of its Youth Enrichment program.
That idea led to the class for kids in second through fifth grade, said Katelyn Graves, youth program manager and assistant Camp J director.
Kids from the chess camp have signed up for the Check Mates as well, according to Graves. Others have learned about the group and their interest is piqued.
“They were like, ‘we wanted to go to chess club. We’ll be back later today.’” Graves said. “It’s gotten some kids together that I don’t think would have met otherwise.”
Seavers said all kids are welcomed in the Check Mates whether they know the game or not.
“No matter what their skill level is ,they’ll learn something,” he said. “The guys [in the class now] are great. So, it’s a great opportunity for anybody to come in and make new friends. We go out to the tournaments, gain some good experiences, and possibly make friends in other parts of the city.”
One member, Seth Scarborough, an 8-year-old third grader at Kentucky Country Day School, has been playing chess since the first grade. He got interested in the game after attending camp.
“I like that we get to learn a lot about chess,” he said of the Check Mates.
While Seth was already involved in the chess club at KCD, his mom, Robin Scarborough, said the Check Mates has taught him much more.
“At KCD they just play and have fun, and it’s not so much about strategy or anything like that,” she said. “But at The J, Coach Corbin – who is a very good coach in my opinion – he makes it feel more like a team, like they’re getting better at it, and winning tournaments. He’s really good.”
Seth described the pointers he’s picking up.
“We learned the Seven Deadly Tactics, and some good strategy,” he said. “Some things about special pieces, and that rooks that will always have the same amount of space, no matter what, except bishops don’t.”
Rooks and bishops are two of several chess pieces available to each player. The rook moves perpendicularly, while the bishop moves in an X fashion.
Graves calls Seth “our master chess player,” but members can have plenty of chess experience or none at all.
So far, the Check Mates have competed in two tournaments in Louisville, and they will continue to practice in preparation for the Queen City Classic in Cincinnati in March 2020.
Organizing more regional events, though, will cost money.
“We’d love more financial support, business support,” Seavers said. “I’d like to be able to start taking the kids to out-of-state tournaments.”

Want to join?
The Check Mates meets 5:45 p.m. Thursdays at The J. It’s $85 for members, and $100 for non-members. For more information, visit jewishlouisville.org.