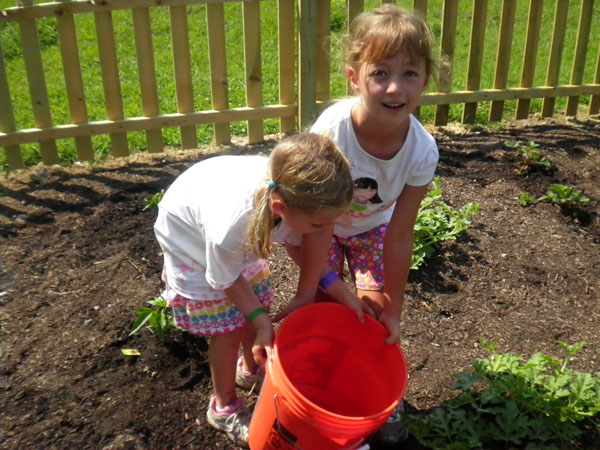 Sukkot has ended and the cool crisp air is signaling the transition into fall. With the change also comes the end of farmers markets and backyard gardens. The Jewish Community Center’s Community Garden, located behind the pavilion on the JCC’s campus, is also winding down its first year of production but remains a testament to vision, hard work and collaboration.

The idea to create a permanent garden had its start in the minds of Laurence Nibur, Justin Sadle and David Klein, who saw it as a resource for local produce to benefit the community. It is the first community garden of its kind and Mayor Greg Fischer hopes to model other programs off the project. There were many hands that spent time in the soil to provide locally produced food for the food pantry at Jewish Family and Career Service.

High school students created the garden during the spring service project on Earth Day. The teens planted cucumbers, cabbage, lettuce, tomatoes and other vegetables and fruit.

Over the summer, JCC campers tended the garden and brought the produce to JFCS. More than 20 buckets of food were donated to the food pantry to be given away to those in need.

“The fresh fruit and vegetables really were a treat because our clients don’t always get fresh produce,” said Shelley Kahn, volunteer coordinator at JFCS. “We can’t guarantee fresh food from Dare to Care because they don’t always have it, and when they do, it doesn’t always look the best.”

The project will continue as long as the garden is producing food this fall and will be restarted next spring with planting by the high schoolers. In the near future, a 12-tree fruit orchard should start producing fruit as well.