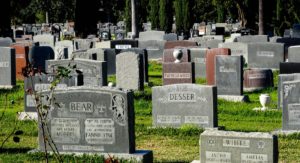 Jewish funerals must be modified to keep mourners safe during the coronavirus pandemic.

When Rabbi Michael Wolk officiated at his first funeral of the coronavirus era, he found it … different.
“While the only people physically present were the gravedigger, the funeral director and myself,” he said, “there were eight to 10 family members of the deceased participating through Zoom,” the online conferencing platform made popular by the pandemic.
Normally, Wolk prepares a eulogy and invites specific mourners to make remarks. “This time, I provided space for any family member to speak of their loved one.”
The hardest part of the service, for Wolk at least, came when he saw the casket sitting by itself at the gravesite. Jews traditionally accompany the dead until the body is buried.
“While it was sad that the family could not be there,” Wolk said, “I also felt a sense of responsibility that this person should have a Jewish burial even under terrible circumstances.”
Wolk isn’t alone. Across America, rabbis, funeral directors and cemetery officials are reconciling Jewish funeral rituals to fit the coronavirus pandemic. Many are taking to social media to share their experiences and concerns.
Of course mourners are struggling even more with the new normal.
Dr. Steven Bloom of Louisville couldn’t even be with his mother, who just passed away in New Jersey. Her facility was in lockdown, he said.
“They’re not allowed to leave their apartments,” Bloom said. Their meals are delivered to their doors. “They even had security at the elevators to make sure no one got out.”
Were it not for an iPad Bloom sent to his mother, she would not have seen her children and grandchildren during the last 10 days of her life.

The Jewish funeral process includes ancient customs:
Tahara (ritual washing) and shmira (guarding the body) happen prior to the funeral itself. The burial traditionally happens 24 hours after death and calls for mourners to fill the grave themselves.
Finally, there is shiva, the traditional seven-day period of mourning when guests call on the family, bring food and help them make a minyan, the quorum of 10 worshippers that halachically enables mourners to recite Kaddish.
All these customs have been upended by the coronavirus.
Keneseth Israel, for example, has instituted its own guidelines for funerals at this time: All funerals will be held at the graveside; only the immediate family may attend (digital platforms may be used to allow communal participation) and shiva will be observed privately at home with condolences offered by phone. Instead of minyans at the shiva house, the family is encouraged to join online services to say Kaddish.
Some families are electing to hold memorial services later when the pandemic passes.
Rabbi David Ariel-Joel has one such family at The Temple. “The family is waiting with the remains to do the memorial service when this is over,” he said.
Where services are still happening, funeral directors and cemeteries have instituted rules that once could be described as draconian.
But not now.
In some places, only clergy, funeral home staff and cemetery workers are allowed. Others may permit one or two relatives representing the rest of the family. Some cemeteries say either clergy or family may attend, not both.
In some cemeteries, only staff may carry the casket to the gravesite – doing away with pallbearers. Frequently, the mourners – when they may attend – must wait in their cars until the casket is in place at the grave.
Funeral directors are spacing chairs for mourners six feet apart at graveside, if family members may attend. One cemetery, not in Louisville, was described online as “BYOS” (bring your own shovels).
Soil from Israel is still sprinkled into the graves, though some funeral directors have taken to sanitizing the packets before use.
Of course, funeral homes no longer permit hugging, handshakes or any type of physical contact. Louisville is no exception to these rules.
Herman Meyer & Son Inc., Louisville’s only Jewish funeral home, has released its own guidelines for the foreseeable future.
“We will not have a funeral chapel service and we are only conducting graveside services, with limited family attendance, at this point,” Meyer Funeral Director John Proffitt said in a statement. “A public service can and will be conducted at a later date.”
The rules result in funerals that are quicker, lonelier affairs.
Rabbi Beth Jacowitz Chottiner of Temple Shalom just officiated at her first funeral during the pandemic at Meyers. Just three mourners were present.

The traditional washing and guarding of the bodies can still be done during the pandemic, but even these rituals must conform.
The Louisville Chevra Kadisha may continue to wash and watch over bodies during this time, according to Proffitt, but it won’t be business as usual.
“We have all the necessary PPE (personal protective equipment) and guidelines in place, Proffitt said. “They will use proper sanitary practices and procedures. We will be adhering to the CDC recommendations, along with state and local authority recommendations and mandates. We will leave it up to the individuals of our CK society, if they wish to participate or not.”
The work of the shomrim, those who watch over the bodies until the funeral, should not be affected.
“That will be okay,” Proffitt said, “as the individual sitting will not be in close contact to the deceased loved one.”

While social distancing has made Jewish funeral rites more challenging, some families think something good might result.
The Rothstein family, which just buried their sister-in-law and aunt, Ruth Anne Myers, in the KI Cemetery, think Zoom and other conferencing platforms will make funerals more accessible, even after the crisis passes.
“Under a terrible circumstance, Zoom made it better,” said Michael Rothstein, who grew up in Louisville but now lives in Chicago, along with his brother, Jack. Neither could be here for the burial.
“We stayed on for quite a bit of time, remembering, reminiscing,” Michael said. “We had a family gathering on Zoom…. We have committed to doing it again.”
Their father, Joe Rothstein, who still lives here, said 25 people attended via Zoom.
Father and sons think conferencing platforms are proving their worth at funerals, even when social distancing is no longer necessary.
“It would be a wonderful thing,” Michael said, “if we had the ability to participate in funerals around the world via Zoom when we are not able to participate in person.”