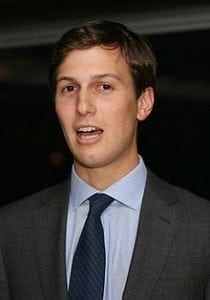 JERUSALEM — Jared Kushner upon arriving in Israel on Wednesday visited the family of an Israeli border policewoman stabbed to death by a Palestinian terrorist.

Kushner, a senior adviser to President Donald Trump as well as the president’s Jewish son-in-law, is in Israel to lead the Trump administration’s push for restarted peace talks between Israel and the Palestinians.

He and the U.S. ambassador to Israel, David Friedman, visited the family of Hadas Malka for about a half hour, Ynet reported, citing a close friend of the Malka family. Kushner told the family that “the president himself asked him to express condolences on behalf of the United States.”

The family spoke to their American guests about Malka, 23, and her bravery, and updated them about the investigation into the attack, Ynet reported.

When Jason Greenblatt, Trump’s special envoy to the Middle East, arrived in Israel on Sunday, he visited the Malka home and the Western Wall before the start of meetings with Israeli and Palestinian officials.

Ynet also reported Wednesday that two kindergarten buildings under construction in the coastal city of Netanya will be named for Malka and Hadar Cohen, 19, a border policewoman who was killed in a terrorist stabbing attack in February 2016 — like Malka, at the Damascus Gate in the Old City of Jerusalem.

The parents of both women will be invited to inaugurate the buildings when they are completed.