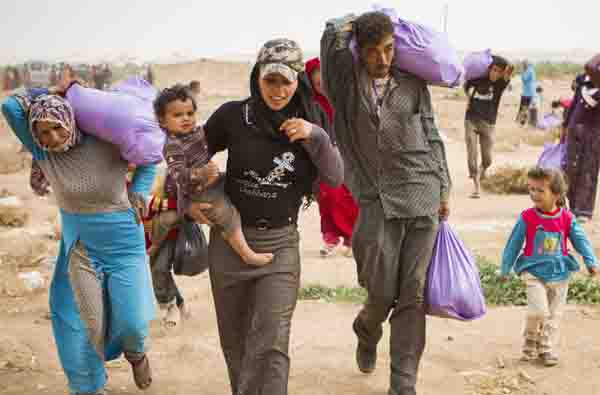 They contain an array of staple dry goods – lentils, pasta, powdered milk, tea – as well as a range of hygiene products like soap and detergent, enough for 250 refugee families. But before the goods were handed out, one thing will be removed – the word “Jewish.”

Going sack by sack with a pair of scissors, an aid worker begins to cut.
“We don’t announce with trumpets that we’re Israeli,” the worker says. “There’s no need for that. Once you let that cat out of the bag, everything starts to blow up.”

The sacks are paid for by IsraAid, an Israeli nonprofit that provides disaster relief and humanitarian aid across the world. The group has provided medical care and psychological services following earthquakes in Japan and Haiti, and supplies food and other materials to refugees at two camps in Kenya.

IsraAid began working in Jordan early this year. Since then, the organization says it has provided approximately $100,000 worth of supplies to refugees who have escaped Syria’s brutal civil war.

But because Syria and Israel technically have been at war for four decades, discretion and security are paramount in IsraAid’s Jordanian operation. Most aid workers interviewed requested anonymity, as did the Jordanian nongovernmental organization that is IsraAid’s partner on the ground. Working with Israelis, they say, could endanger their work and the lives of the refugees they help.

Israelis may travel freely to Jordan, but when the IsraAid delegation crossed the border on Friday, it brought a letter from the Jordanian NGO that would facilitate the distribution as well as a list of individuals in its party.

A police escort joined the group’s bumpy ride through northern Jordan, past small villages of flat-roofed houses, lemon groves and vegetable fields. In the distance were the mountains of southern Syria.

“We try to work by the book and not go under the radar,” says Shachar Zahavi, IsraAid’s founding director, who explains that other countries also require extended security checks. “The Jordanians are open to it.”

After 90 minutes, the delegation arrives at the Jordanian NGO’s headquarters, next to an empty lot filled with trash on a side street in this city. The capital city of a region of the same name, half of Mafraq’s 100,000 residents are refugees from the conflict next door.

In total, half a million Syrians have taken refuge in Jordan. Most of them are here, in the border region, and most arrived this year.

Directed by a soft-spoken, gray-haired retiree working without pay, the Jordanian NGO focuses on aiding the 200,000 local refugees not living in Zaatri, the massive United Nations refugee camp nearby. The director keeps meticulous records of the constantly growing number of aid recipients, registering every new arrival, noting the size of their family and when they last received aid. Seventy volunteers help purchase and package supplies with funds from groups like IsraAid.

With the word “Jewish” removed, the purple bags begin to travel in a human chain down a tight stairwell to the refugees below, almost all of them women wearing long black dresses and matching hijabs. Bags are loaded onto trucks or carried in hand back to wherever they are staying.

One woman approaches a volunteer to explain, through basic Arabic and hand motions, that a relative has cancer. Where, she asks, can she find medicine?

“We’re still at this beginning stage,” the aid worker later tells JTA. “You’re still being inundated with refugees. They’re always going to need food until the situation is stable.”

The next stop for the IsraAid workers is Hamra, an impromptu refugee camp set up a month ago 20 minutes outside Mafraq. Situated under power lines, surrounded by desert and about to be clouded by a suffocating sandstorm, the camp is home to 25 families from a Damascus suburb who had walked 60 miles to the Jordanian border to escape the fighting.

Now they share space in 10 tents with dirty, beige flaps featuring the block letters U.N.H.C.R. – for United Nations High Commissioner for Refugees – in faded blue. Inside one, seven thin mattresses sit in a square on a tattered rug. A second room, with a small burner and piles of pots and pans, serves as the tent kitchen.

But an elderly woman shakes as she pulls a deformed hand out of her robe, her two fingers wrapped backwards and melded into what was left of her palm. After the bombing that caused her injury, she joined her children and grandchildren on the 60-mile trek. Now she says nothing, her wrinkled face and sunken eyes conveying a resigned helplessness.

Zahavi hopes that within a month, IsraAid can bring social workers to Mafraq to help refugees cope with the psychological trauma. Israelis, Zahavi says, are experts in trauma care after decades of dealing with terror attacks.

“My main agenda is to put Israelis on the ground around the world and show the world that Israel cares about them,” he says.

IsraAid receives support from several foundations, but the organization says some of its donors initially were reluctant to fund its work in Jordan for fear of becoming involved in the Syria-Israel conflict. But the aid worker says that when refugees discover the Israeli connection, they are still grateful for the help – no matter its political implications.

“You’re talking about hungry people,” she says. “These people are in a dire situation. If I hand someone a can of tuna, do they really care where it’s coming from?”

Sukkot On September 25, the Hillel students had dinner in Josh Goodman’s Sukkah located near the University of Louisville campus. Last year, Goodman received a grant from Birthright Next for the materials needed to build the sukkah, and he was …

[by Shiela Steinman Wallace, Editor, Community] There are a number of national Jewish organizations that advocate for Israel, contesting misrepresentations about Israel, advocating for the continuation of close American/Israeli strategic, diplomatic, defense and economic ties and on many levels. One of …