by Uriel Heilman
NEW YORK, January 19, 2010 (JTA) – The text messages started coming in to Shachar Zahavi’s cell phone in the middle of the night: “What are we going to do about Haiti?”

After an eight-hour effort, the IDF rescue team pulled a Haitian man alive out of the rubble on January 17, 2010. (IDF)

Zahavi, chairman of IsraAid, a coordinating organization for 17 Israeli and Jewish humanitarian groups, hadn’t even heard yet about the earthquake that had rocked Port-au-Prince, leaving untold thousands dead.

By morning, preparations already were under way to dispatch an Israeli relief team to the devastated Caribbean nation. Consisting of doctors, nurses, paramedics and logistics experts, the 15-person group arrived Saturday in Port-au-Prince and immediately set to work treating wounded Haitians at the site of a collapsed hospital near the city center.

On Monday, deep into the thick of coordinating logistics for a second aid team to replace the first, Zahavi received a heartening text message from one of his team members in Haiti: “A 6 year old girl, Jessica Hartelin, was just pulled from the rubble by locals nearly six days after the earthquake, was rushed to our clinic and treated by the IsraAID/FIRST medical team. She was saved. She will be transferred in the next few minutes to the Israeli Defense Force field hospital for further treatment.”

It was one bright spot in a week that aid workers described as alternately heartbreaking and exhilarating.

The IsraAid team, comprised fully of volunteers, was just one component of the broad Israeli and Jewish effort to help Haiti. As soon as the magnitude of the earthquake’s destruction became apparent, humanitarian officials sprang into action. 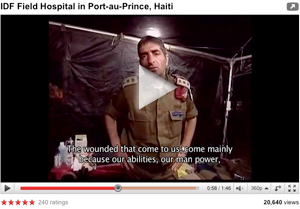 The Israel Defense Forces was the first major Israeli team to arrive. Team members reached Haiti last Friday on a flight loaded with military and civilian medical personnel from all over Israel, rescue teams, search dogs and supplies. While Port-au-Prince’s hospitals were rendered mostly useless by the quake, the IDF team set up a field hospital near a soccer stadium to treat survivors. It was one of the only places Haitians could receive advanced medical treatment in the city.

“The Israeli field hospital is phenomenal,” Dr. Richard Besser of ABC News told “Good Morning America.” “They were up and running on Saturday morning, way ahead of the United States hospital.”

When Besser encountered a woman in labor named Soraya in a Port-au-Prince park, he contacted the only medical facility he knew about in town: the one run by the Israelis.

“Before long, Soraya had an operating room waiting for her,” said Besser, who helped deliver the baby. “Ultrasounds, IVs, medications. Soraya was now getting better care than she could have ever imagined.”

On Saturday, Israeli doctors at the hospital delivered a baby boy whose grateful mother said she’d name the boy Israel.
Meanwhile, other civilian aid workers were having trouble getting into Haiti. Power was down in most of Port-au-Prince, complicating matters, and airplanes on the ground at the city’s airport lacked sufficient fuel to take off and make way for additional aid flights to land.

The airport in Santo Domingo, in the neighboring Dominican Republic, became an alternate staging area, and aid officials from around the world converged on the Dominican capital as a first step toward reaching the earthquake zone in Port-au-Prince.
In Israel late last week, frustrated aid workers idled as they waited for a clear route into Haiti to be established. Reached by telephone last Friday, an official from Magen David Adom, Israel’s version of the Red Cross, said the group still hadn’t received clearance to leave.

It took until Monday for the team of five Magen David Adom paramedics to get to Port-au-Prince, which they reached overland after landing in the Dominican Republic. Once in Haiti, the paramedics set up a field hospital in conjunction with the Norwegian Red Cross at the courtyard of the university hospital in Port-au-Prince. The hospital was up and running Tuesday morning.

A group from the Israeli disaster relief organization ZAKA was in a better position to move quickly. ZAKA had a team of rescue workers in Mexico assisting in recovery efforts following a helicopter crash there two days before the quake hit, so when the official Mexican aid delegation to Haiti left Mexico, Israeli rescue workers hitched a ride with them aboard a Mexican Air Force Hercules aircraft.

Before the week was over, ZAKA rescue workers had pulled out eight students alive from the wreckage of a collapsed university building.

In a statement, the head of the delegation, Mati Goldstein, was quoted in an e-mail describing a “Shabbat from hell” in the earthquake-ravaged city. ZAKA is made up of Orthodox Jewish volunteers.

“Everywhere, the acrid smell of bodies hangs in the air. It’s just like the stories we are told of the Holocaust – thousands of bodies everywhere,” Goldstein wrote. “You have to understand that the situation is true madness, and the more time passes, there are more and more bodies, in numbers that cannot be grasped. It is beyond comprehension.”

Whether clad in IDF uniforms, wearing the flag of Israel on their shoulders or holding Shabbat prayers during a brief break from their rescue work, the Israeli aid workers’ visible presence in Haiti is helping to promote a positive image of Israel in a world more accustomed to seeing the nation negatively.

“I am sure it is good for the Israeli image, but we’re not doing it only because of this,” said Danny Biran, ambassador of logistical and administrative affairs for Israel’s mission to the United Nations and the Americas. “We are doing it because we believe in what we are doing.”

“We always carry an Israeli flag and hang it wherever we work. We don’t do anything under the radar,” said Zahavi of IsraAid. “It’s important for us to show that we come on behalf of the Israeli people, and people should know we’re there for them.”

The IsraAid coalition is made up of aid organizations – such as the Fast Israeli Rescue and Search Team (FIRST), the Jerusalem AIDS Project and Pirchey Refua-Israeli Youth Medical Cadets – as well as funding organizations including the American Jewish Committee, B’nai B’rtih International and UJA-Federation of Greater Toronto.

In an interview from Port-au-Prince, one of IsraAid’s logistics volunteers, Alan Schneider, director of the B’nai B’rith World Center in Jerusalem, said the destruction in Haiti was overwhelming.

“I’ve been to Chad, Sri Lanka, Myanmar, Kenya and Georgia on IsraAid missions, and I’ve never ever seen anything of this scale,” Schnieder said by telephone as patients receiving treatment at IsraAid’s clinic could be heard screaming in the background. “It’s like a war scene.”

(For comprehensive coverage of the Israeli and Jewish aid effort in Haiti, including videos and photos, visit JTA online at www.jta.org.)