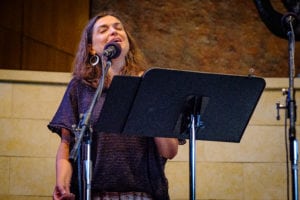 Cantor Sharon Hordes was one of seven cantors and vocalists to tell Israel’s story in sonf during the Seven Decades of Israeli popular Music program at Adath Jeshurun. Vocalist Jennifer Diamond of The Temple (feature photo) also performed at the program.(photos by Jerry Wolff)

Adath Jeshurun used music to mark Israel’s 70th anniversary Wednesday, May 30, presenting a program of popular songs from all seven decades of the Jewish state’s existence.
“Seven Decades of Israeli Popular Music,” was taped live at AJ by the public radio music program Kentucky Homefront.
Cantors David Lipp, Sharon Hordes, Yvon Shore, Paula Pepperstone, Melissa Cohen and Sarah Levine and vocalist Jennifer Diamond performed the music accompanied by Kentucky Homefront musicians,
Professor Ranen Omer-Sherman moderated the program, which will be aired at 8 a.m., Saturday, July 14, on WFPK, 91.9 FM.
The 150 people in the sanctuary were treated to an entertaining demonstration of how Israeli music has morphed since independence.
“Israelis are divided in many ways,” Omer-Sherman said, “but music continues to be a unifying experience.”
The cantors sang 14 selections, starting with Ha’ami Yom Yavo (Believe it, a Day will Come), performed by Hordes, a poetic Ashkenazi-style yearning for peace as a young husband bids farewell to his wife before going to war.
The show culminated with Mizmor Layla (Night Song), made famous by Ahinoam Nini – better known as Noa – perhaps the best-known Israeli singer today and an outspoken proponent for the two-state solution. Cantor Shore, of Hebrew Union College in Cincinnati, sang the Arab-influenced melody, urging the crowd to clap along and ululating in the celebratory tradition of Arab and Mizrahi Jewish women. 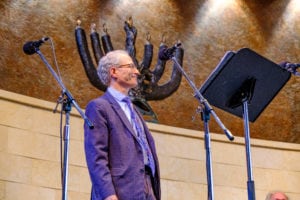 Above, Cantor David Lipp accepts applause before singing a number.

In between, the cantors sang an eclectic mix of Sephardi, Mizrahi and Ethiopian-influenced music.
In Lu Yehi (May it Be), a song by Naomi Schemer, who also wrote Jerusalem of Gold, Diamond, The Temple vocalist, performed the post-Yom Kippur War expression of hope in uncertain times.
Shir HaFreicha (Teaser’s Song), made famous by the late Yemenite pop star Ofra Haza, is an upbeat piece about a woman who chooses to live life despite its challenges and sadness. Cantor Levine of the West End Synagogue in Nashville, Tennessee sang this tune. 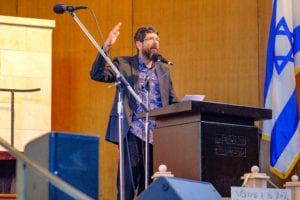 Ranen Omer-Sherman
tells the story behind each song.

And Cantor Lipp of AJ, sang Yoshvim b’Veit Kafe (Sitting in a Coffee House), an angst-riddled song by the ethnically diverse Israeli rock band Teapacks. The lyrics reflect a pervasive feeling of helplessness by the state of affairs: “Sitting in a coffeehouse/Feeling in a bubble/What haven’t we done/Where were we wrong?”
Louisville welcomed back Cantor Pepperstone, currently of Beth Sholom-Chevra Shas, in DeWitt, New York, who served as hazzan of Keneseth Israel from 2002 to 2008. She sang Horef ’73 (Winter ’73). Often sung on Yom HaZikaron, it is about IDF soldiers born after the Yom Kippur War, dispirited by promises not kept: You promised a dove/an olive tree leaf/you promised peace/You promised spring at home and blossoms/You promised to fulfill promises/You promised a dove.
The program concluded with an instrumental version of Schemer’s Yerushalayim Shel Zahav (Jerusalem of Gold), which has become an anthem for the Israeli capital since unification in 1967.

The Jewish Community of Louisville honored some of its leading figures at its 10th Annual Meeting on May 29. The meeting, which is meant to “celebrate the work we do together,” according to JCL Chairman Jon Fleischaker, recognized 11 teen …

Two Kentucky school teachers who have made major, though different, contributions to Holocaust education in the state, will travel together to Poland this summer to see the scenes of the genocide for themselves. Ron Skillern, who teaches Holocaust studies at …