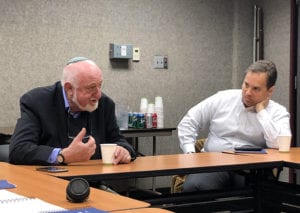 Avraham Infeld addresses a group of J staff members about the role of community centers in Jewish life. (Community photo by Lee Chottiner)

Jewish Community Centers – now known as Js – must stoke the continued “renaissance” of the Jewish people by serving their communal needs, Avraham Infeld said. However, their spiritual needs should be addressed separately by the synagogues.
“We’re not a religion, but we do have a God-centered culture,” the longtime educator, author and Jewish leader said. “God is a part of the Jewish people. Judaism has a religion. It is not a religion.”
Infeld spoke to the staff of The J on October 15, exhorting them to provide the community a place where they can ask questions and grow as a multifaceted family. He also encouraged them to continue welcoming non-Jews and interfaith families.
“This is the home of the Jewish people of Louisville,” he said.
A past president of Hillel International and the first director of Taglit Birthright Israel, Infeld, 75, came to Louisville for The J’s Innovation Series, a five-part lecture program on Israel, the Derby City, and how innovation defines the two. Previous speakers have included Israeli culinary journalist Gil Hovav; Aric Mutchnick, president and CEO of Experior Group, Inc., a global security and counter-terrorism consulting firm, and Ari Sacher, a rocket scientist with extensive experience in the defense industry.
Infeld’s visit here coincided with the Jewish Community of Louisville’s ongoing effort build a new J on its Dutchmans Lane campus. The intersection of the two lent extra relevance to his talk, in which he exhorted the professionals to serve the entire community, not just their members.
Infeld outlined three roles a J must play in the life of a Jewish community:
• A center for lifelong education that encourages the asking of questions;
• An intergenerational place where young and old adults model the pursuit of education for children;
• An interdenominational setting where Jews can see what unites them more than what divides them.
Everything starts with education, which is distinctly different from teaching, Infeld noted. Teaching depends on answers. Education depends on “provoking questions.”
In a time that is inundated with information, he said, the role of educators and institutions such as The J is to “create opportunities for people to ask as many questions as possible.”
He bemoaned the trend to treat education as something just for young people with the bar or bat mitzvah serving as a graduation ceremony.
“Death is the only way you graduate from education,” he said. “Jews have learned their entire lives. Where did we get the idea that education was just for kids?”
Quoting his father, the South African-born Infeld said that the minimum a Jew needs to know is “more today than yesterday.”
He urged J leaders to boldly use Hebrew – which he described as a communal force in Jewish life in Israel – for its daily operations.
“Hebrew should be used in the JCC. The pool should be called brekhah; the kitchen should be called meetbakh, and the classroom should be called keetah.”
And Jews of all ages and backgrounds should feel at home here, he said.
“When I walk into a synagogue, I make a statement of how I’m different from other Jews,” Infeld said. “When I walk into a [J], I make a statement about how much I have in common with other Jews.
“If we only have synagogues, we will continue to send the stupid message that Judaism is a religion. Judaism is not a religion; it is the culture of the Jewish people.”
But Infeld revised that message later in his talk, referring to Judaism as a people with a “God-centered culture.”
He said synagogues should nurture the spiritual side of Jewish culture, and he criticized Israelis for, in large part, rejecting the house of worship.
“They think it’s enough to have a flag and an army,” Infeld said. “They’re wrong.”
In addition to his work at Hillel and Birthright, Infeld has chaired the Board of the Hillels of Israel. In 1970, he founded Melitz, a non-profit educational service institution that fosters Jewish identity, was director general of Gesher Educational Affiliates, the Shalom Hartman Institute and was director of the Jewish Agency’s Youth Department for English-speaking Europe.
He is a graduate of the Hebrew University in Bible and Jewish History, and of Tel Aviv University’s Law School.
During his visit, Infeld also spoke on “The Next Jewish Community” at the Rudd Heart & Lung Center at Jewish Hospital.