Asked what Jews can do about the declining levels of affiliation these days, Uriel Heilman had an interesting answer.

“Have more kids,” he told the 40-some people at a recent breakfast talk at Keneseth Israel Congregation, most of whom were of a certain age that made the idea not so viable.

Still, Heilman’s tongue-in-cheek response came wrapped in a serious message: American Jewry is shrinking and Louisville is no exception.

The American Jewish community, he said, is being shaped by four trends: drops in affiliation, disregard for traditional definitions of Judaism, demographic shifts and the rise of Orthodoxy.

None of this means Judaism – non-Orthodox Judaism – is dying. In fact, Heilman, an award-winning journalist, cited several new and creative ways in which young people were expressing their Jewishness. 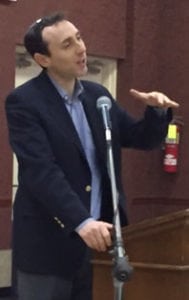 Heilman, senior reporter at JTA, was the 2017 David and Reva Waldman Kahn Scholar in Residence at KI during the weekend of February 4. He also spoke about the Washington political climate and its impact on the Middle East, and he met with teenagers at the High School of Jewish Studies.

But this crowd came to hear about the numbers crunch with which Judaism and other organized religions are grappling.

“American Jews, like Americans generally, are disaffiliating,” Heilman said. “You see this among millennials most of all; they’re not affiliating with institutions of any kind. And the denominational movements are experiencing this disaffiliation trend vey sharply, particularly in the Conservative movement.”  (He also noted that growth in the Reform movement is “flat.”)

“People don’t feel the need any longer to identify with these overarching movements,” he added. “They don’t like labels.”

That doesn’t necessarily mean there are fewer congregations, he said. It does mean that many synagogues are exploring Jewishness independent of a denominational identity. Louisville’s Congregation Adath Jeshurun is one example.

(One such “Jewish peace corps” is called Justifi. It sends Jewish college students and young professionals to far-flung corners of the world to help entities on the ground build up their own community projects and infrastructure. UofL graduate student Jacob Efman just came back from a Justifi mission to Nicaragua. His first-person account is here.)

“There’s just a million different organizations,” Heilman said. There’s a lot of innovation happening, a lot going on. But it’s no longer these overarching movements. People don’t want to be affiliated.”

Not only are Jews disaffiliating, they’re walking away from the self-imposed boundaries past generations set for being Jewish.

Intermarriage for instance. Jewish parents once sat shiva if a son or daughter married out of the faith.

Today, according to the 2013 Pew Research Center of American Jewish Life study, the intermarriage rate is 58 percent, according to Heilman, and more than half of the rabbis surveyed say they performed interfaith weddings.

“Now, of course, these questions feel very passe,” Heilman said. “The question is not how to prevent intermarriage, not how to fight it, but how to be as welcoming as possible…. It’s going to happen whether you like it or not, the question is how are you going to react?”

And unlike Eastern Europe, American Jews don’t feel threatened by their neighbors.

“The problem is not that non-Jews hate the Jews,” Heilman said. “The non-Jews love the Jews; they want to marry us.”

“Being Jewish is no longer a stigma,” he added.

Today, Judaism is about choice, he said, not about boundaries.

He quoted Rabbi Rick Jacobs, president of the Union for Reform Judaism, who said his movement wouldn’t even focus on conversion anymore.

“There are plenty of people who want to sojourn in the synagogue and not to convert and still know they’re part of the Jewish family,” Heilman quoted Jacobs as saying, “and we welcome them.”

Still, longstanding Jewish communities continue to shrink as Jews, like most Americans, to move south by southwest and have fewer children (1.9 percent compared to 3.9 percent in Israel).

The one growth sector is Orthodox Judaism. Heilman said 27 percent of all Jews under age 18 in America today live in Orthodox households. And their birthrate is 4.1 percent.