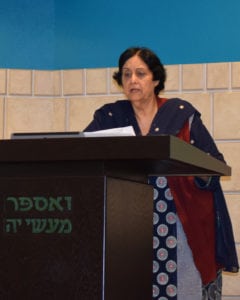 Professor Riffat Hassan called for an “intensive Muslim-Jewish dialogue” when she addressed the Melton Celebration of Learning on June 4. (photo by Lee Chottiner)

People in the crowd gasped as Riffat Hassan described how comfortable she felt being in a synagogue for a Florence Melton school program.

“I am both happy and sad to be here,” Hassan said, “happy because of what I had heard from the Melton scholars and the atmosphere of learning, and sad because I feel more at home here than in almost any mosque in Louisville.”

That’s quite a statement coming from a Muslim, a theologian and a scholar of the Quran.

But Hassan, a professor emerita of religious studies at the University of Louisville and the keynote speaker for Melton’s Celebration of Learning, Sunday, June 4, at Adath Jeshurun, said her words reflected her own experiences and the state of learning in the mosque.

She said the “atmosphere of learning” is very different there.

“Education is not a priority in the mosques, except in a ritualistic way,” she told Community after the program.

When she is among Melton participants, she added, “I sense a freeing.”

Education was the focus of Hassan’s remarks at the Melton ceremony. She said the Quran, if studied carefully, directly addresses the Jewish people. It teaches respect for Judaism and calls upon Muslims to follow the Hebrew prophets and Jewish scriptures.

“I cannot be a Muslim if I do not accept all the prophets you believe in,” she said.

All this, she said, counters beliefs of many Muslims who think the Quran is critical of Judaism and that God has rejected it.

Because of such misunderstandings, Hassan, a long-time drumbeater for interreligious discourse, called for an “intensive Muslim-Jewish dialogue,” including the study of each other’s texts and traditions.

“The time has come when this dialogue needs to be pursued vigorously,” she said, “and I can’t think of a better place [to do so] than the Melton program.” 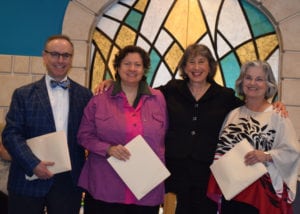 Born and raised in Pakistan, Hassan, a feminist, said she struggled with conservative religious attitudes in her country while growing up, particularly views on the role of women – struggles that are reflected in her views today.

Hassan’s call to action came at the same ceremony where Melton officials announced that a new course – The Star and the Crescent – would be taught this fall.

“The new course curriculum has just been released by Hebrew University,” said Melton Director Deborah Slosberg. “That’s why I wanted to have an Islamic scholar speak.”

Hassan also promoted the Salaam Network, a local effort of “interfaith educators, peacemakers, writers and supporters,” according to its website, to counter islamophobia and other forms of intolerance through education.

The Melton Celebration of Learning is a defacto graduation ceremony from the adult education program, though Slosberg doesn’t care for the G word.

“There’s no such thing as graduation in Melton,” she told the crowd gathered in the AJ chapel. “That’s why we call it a celebration of learning.”

During the program, Slosberg made a tzedakah presentation, giving a check for $2,400 to Janet Meyer for the JFCS Food Pantry. Meyer said the pantry serves 150 people per month, and the need is greater during the summer.

Rabbi Bob Slosberg lauded Deborah, his wife, for reenergizing Melton. During her four-year tenure, he noted, enrollment has risen from 30 to 116 while the program’s budget has gone from $25,000 to $73,000.

The rabbi also paid tribute to two Melton students who died over the past year: Jackie Kanovitz and Joyce Loeser.

Loeser, the rabbi said, always considered Melton to be “the highlight of her week” while Kanovitz, a relative newcomer to the program, embraced learning in an inspiring way, signing up for Melton classes even though she knew she was dying.

Hundreds celebrated the 69th anniversary of the State of Israel — and the opening The J’s outdoor pool for the summer season — on Sunday, May 28. The J Family Festival & Yom Ha’atzmaut Celebration waived guest pass fees to …

The Trump administration’s decision to withdraw from the Paris climate agreement has demanded that we all ask ourselves where we stand on questions of climate change, global warming and our collective responsibility for the planet we call home. That the …

This past Sunday, a decision was made by Prime Minister Benjamin Netanyahu and the Israeli government to abandon their commitment to provide egalitarian prayer space at the Western Wall. This action rejects years of negotiations made in good faith with the …