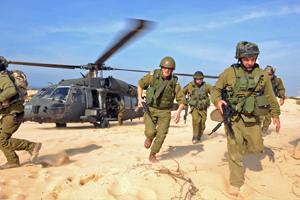 JERUSALEM, January 7, 2009 (JTA) – Clashes between Israeli forces and Palestinian gunmen resumed in the Gaza Strip following the expiration of a three-hour truce to allow in humanitarian aid, residents said.

Residents of the northern Gaza Strip had reported exchanges of fire between Israeli soldiers and Hamas militants during the temporary truce period Wednesday afternoon. In Gaza City, hundreds had taken to the streets during the hiatus, shopping and visiting relatives.

Israel had held its fire on the Gaza Strip in a “humanitarian pause” shortly before French President Nicolas Sarkozy announced that the Jewish state and the Palestinian Authority accepted a truce plan.

A Lebanon-based Hamas representative and Islamic Jihad rejected the plan, however.

Israel did not confirm its acceptance of the truce plan following Sarkozy’s announcement Wednesday afternoon, but a statement released from the Prime Minister’s Office read that “Israel thanks Egyptian President Hosni Mubarak and French President Nicolas Sarkozy for their efforts to advance a solution for halting terrorist actions from Gaza and the smuggling of war materiel into the Gaza Strip from Egypt. Israel views as positive the dialogue between Egyptian and Israeli officials in order to advance these issues.”

The details of the plan have not been released.

At midday Wednesday, the 12th day of its Operation Cast Lead, Israel ceased fire to allow civilians to leave their homes and restock necessary provisions. The pause also was scheduled to allow food aid and medicine to enter the strip, as well as for repairs of essential infrastructure.

Hamas indicated, though not explicitly, that it would halt rocket fire during the pause.

Olmert announced what he called the “humanitarian corridor” Tuesday night. Olmert presented the idea, which he said originated with the United Nations, in a telephone conversation with U.S. Secretary of State Condoleezza Rice.

The humanitarian pause will be implemented every other day, according to a statement from the Defense Ministry’s Coordination of Government Activities in the Territories division.

Rockets continued to strike Israel after the hiatus, with two falling on Beersheba shortly after it ended. At least 14 rockets struck Israel Wednesday morning following a night without attacks. One long-range Grad rocket landed on residential property in Ashkelon, where two people were treated for shock. A building also was damaged by a Grad missile in Ashdod, injuring one person.

School remains canceled in all southern Israeli communities within a 25-mile radius of the Gaza Strip.

As to the truce plan, Israel government spokesman Mark Regev told The Associated Press after Sarkozy’s announcement that Israel could accept the proposal, unveiled Tuesday night by Mubarak, if it stops rocket fire from Gaza and includes serious measures to prevent Hamas from obtaining arms through Egypt.

A statement from Sarkozy’s office said, “The president is delighted by the acceptance by Israel and the Palestinian Authority of the Franco-Egyptian plan presented last night in Sharm el-Sheikh by President Hosni Mubarak.”
The Hamas representative, Osama Hamdan, said the plan is unacceptable, Ynet reported.

“There is no need to get excited over the Israeli agreement that was published,” Hamdan said. “Israel’s objective is to gain time in order to continue its offensive.”

Islamic Jihad in its rejection said the initiative is “pathetic and serves Israel,” and that it will continue to fight against Israel, Ynet reported.

Israel’s Security Cabinet met Wednesday to decide whether to enlarge the Gaza operation. The Cabinet, which includes Prime Minister Ehud Olmert, Foreign Minister Tzipi Livni and Defense Minister Ehud Barak, adjourned without making a decision, the Israeli daily Ha’aretz reported, but issued a statement praising efforts by third parties to come up with a truce plan.

The Cabinet also voted to continue the Gaza operation.