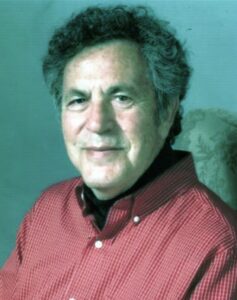 Fred Gross, 85, of Louisville, a journalist, author and leading advocate for Holocaust and genocide education, passed away with his family by his side on Wednesday, Dec. 29, 2021.
Fred was one of the last Holocaust survivors in Louisville to speak publicly about his experiences.
“Fred Gross was a gifted educator, leader in the community, and a good friend,” said Matt Goldberg, director of the Jewish Community Relatiuons Council. “His life experience as a Holocaust survivor was the primary source for his commitment to fighting injustice wherever he saw it.”
A child during the Holocaust, Fred’s family fled Antwerp, Belgium, upon the Nazi invasion there, when he was 3. For the next several years they lived on the run, hiding and evading capture from Hitler’s forces.
Surviving the Shoah (Holocaust), Fred and his family came to America when he was 9 and settled in New York City. Like many families who survived, Fred never really talked about its experiences. In 1985, however, at the urging of his wife, Carolyn, Fred began interviewing his mother, Nacha, his two older brothers, Sam and Leo, and other family members, using the same methods that he used throughout his career as a professional journalist.
From there, also using his own personal memories and in-depth historical research, Fred wrote One Step Ahead of Hitler: A Jewish Child’s Journey through France, published in 2010 by Mercer University Press. The book has been recognized for its historical accuracy and outstanding personal story by the U.S. Holocaust Memorial Museum in Washington, D.C.
For nearly 25 years, Fred told his family’s story to thousands of middle and high school students, community groups, churches, synagogues, universities and military groups, across Kentucky and other states. Over time, he received thousands of handwritten letters from students, many about how his story impacted their views on discrimination in their own lives. He developed close relationships with teachers and school districts who valued the impact that an actual Holocaust survivor brought to student learning.
Fred’s impact on Holocaust education in Kentucky will continue to live on due to his tireless work in the passing of the 2018 Ann Klein and Fred Gross Holocaust Education Act, officially mandating instruction of the Holocaust and other acts of genocide in Kentucky’s public schools.
“Mr. Gross traveled to the state capital in Frankfurt numerous times to lobby a variety of representatives and senators,” said Fred Whitaker, a Holocaust studies instructor at Saint Francis of Assisi School and for years a leading lobbyist for the bill. “His ability to speak truth with eloquence and sincerity never failed to capture the attention of those whom we visited.”
Twice, Gross went to Frankfort with students from Saint Francis of Assisi to testify before the house and senate education committee is in support of the legislation.
“His precision of words, the poetry of his speaking, and the authenticity of the cause he supported allowed his words to carry a unique and profound weight,” Whitaker said. “There is no doubt that his testimony was instrumental in persuading individuals who might have otherwise voted no to cast their votes in favor of the legislation.”
Gross’ influence even extended into the arts. David Chack, artistic director of the Bunbury-ShPIeL Identity Theatre Project, which stages Jewish-themed plays in Louisville, described him as “a continual touchstone” for the Black-Jewish intersectional theatre he produces.
“Fred’s excitement was palpable when I brought and directed The Green Book to Louisville,” Chack said. “He was on the after-show panel and his excitement came from how much of his own life was reflected in the play and how theatre could so poignantly and viscerally portray the inner thoughts and feelings of the survivor.”Born in Antwerp, on Oct. 8, 1936, a son of Nacha and Markus Gross, Fred graduated from New York University where he was the editor of the Washington Square College Evening News.
His proudest moments as a journalist were covering the Civil Rights movement, including the protests and riots in New Haven following the assassination of Dr. Martin Luther King Jr. in 1968.
With the keen mind of a reporter, Fred witnessed the upheaval of the time, believing always that his writing should connect readers as much to knowledge and facts as it did to their own hearts. His future work and teaching would profoundly underscore that belief.
Fred was a member of the Jewish Community of Louisville’s (JCL) Community Relations Council and served as its representative on the board of Interfaith Paths to Peace for over a decade. He was a committee member of the JCL’s annual community Yom HaShoah commemoration program.
Many groups bestowed honors and awards on Fred for his contributions to the community, including the Jewish Family & Career Services, the Louisville Jewish Community Center and the Kentucky Association of Counties.
Fred loved watching the news, spending time with his family, listening to jazz and watching his beloved New York Jets.
He is survived by his loving wife of 36 years, Carolyn Humphrey; and four sons: Adam (Jennifer) of Scarsdale, New York; Marc of Los Angeles; Joshua of New Rochelle, New York; and Jonathan (Lakiesha) of Louisville.
His love for his five grandchildren: Haley, Dylan, Ashley, Gabriel and Miles was beyond measure. He also had a special relationship with his brother, sisters-in-laws, nieces, nephews and great-nieces and nephews.
Due to the latest surge of the COVID pandemic, all services are private. Donations in Fred’s memory can be made to the Jewish Federation of Louisville <jewishlouisville.org/federation/donate/>, which will be used for Holocaust Education. Please indicate in the comments section, “In memory of Fred Gross.”