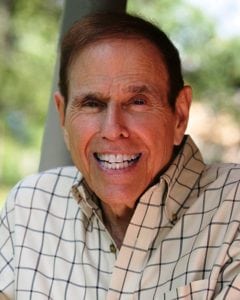 The 2018 Louisville Jewish Film Festival will be more than a lineup of engaging films from around the world; it will be a tribute to Louis Levy, its cofounder and ardent patron.
The decision to honor Levy was made several months ago, before Film Festival Director Marsha Bornstein knew he was ill.
Levy died in December. While he did not live to see this year’s festival and acknowledge the tribute in person, he did know that he was to be honored.
In 1997, David Chack, JCC program director at the time, broached the idea to Levy of creating a Jewish film festival in his hometown.
Levy, who had been active in the Jewish film festival in Washington, D.C., for about 20 years, was eager to do something special in Louisville. A Jewish film festival here fit the bill.
He changed the name of his JCC endowment fund to the Louis Levy Theatre and Film Fund to provide support for the project, and, from day one, took a hands-on approach.
Both Bornstein and Levy’s wife, Wilma Probst Levy, said Levy considered the film festival to be one of the three most important things in his life, the other two being Wilma and Bernie’s Bar Mitzvah – a play in which he played the rabbi – that ran on Broadway, in Baltimore and at the Louisville JCC.
Levy thought about the film festival all the time, Bornstein said. He called her regularly with ideas for making it bigger and better. In fact, she described herself as a “stumbling block” for his vision.
“I’m based in reality and I’m very grounded,” Bornstein said. “Louis had dreams and visions. [He was] a great optimist and super enthusiastic.”
When Bornstein objected to his ideas, Levy would say, “Think Hollywood, darling. Think big!”
Levy actively participated in the film festival committee and attended every meeting of the panel via conference call from his home in Washington. When he found an appropriate picture, he would recommend it for consideration, engaging the other members in lively discussion.
Once the film festival became an established, thriving event, Levy called Bornstein, insisting that it needed a logo for branding purposes. Bornstein protested, saying the festival always ran on a tight budget, so Levy paid for it himself.
In fact, Wilma said, she and her husband collaborated to design the logo. “He was very, very proud of that,” she said.
For Levy, the film festival was a highlight of each year. He came to Louisville for opening night as long as his health permitted, and he often stayed for the entire month, Wilma recalled.
At the first film each year, he would sit at the back of the theater and at just the right moment, “run down the aisle and welcome everyone,” she said. “When he couldn’t come, he would write something for Keiley Castor to read.” Castor is the long-time chair of the film festival committee.
Levy’s passion is prominently displayed in their home, where framed posters from every Louisville Jewish Film Festival adorn the walls. The earliest ones bear the signatures of the committee members.
There is also a small collection of Emmy-like awards that former JCC Executive Director Robin Stratton dubbed “Louis Awards,” presented to him in recognition of his hard work and dedication to the festival.
“Louis had a huge smile and could be so charming,” Bornstein said. “He never knew a stranger in Louisville, in D.C. or anywhere he went. He had a passion for schmoozing and people and life in general.”