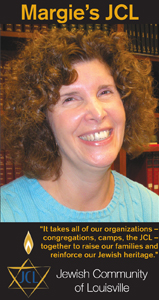 Margie Kommor believes Louisville, KY, is a great place to raise a Jewish family because the entire community works together to deliver the same message: Our Jewish heritage is important.
“Our kids got a great foundation at The Temple Preschool and JCC Camps,” she said. “We’ve also benefited from our congregation’s efforts to make both the Sunday and Hebrew Schools educational and fun.”

In addition, Kommor points out, her children have been encouraged to participate in Jewish camps; her son, Max, worked at the JCC; the High School of Jewish Studies and confirmation classes “have been educational, fun and meaningful;” there are many opportunities through BBYO; and the Merry Mitzvah program provides a great way for her family to do a worthwhile hands-on project together.

The community even keeps Max connected, because The Temple sends him care packages at college.

“All of these organizations and groups helped us reinforce the importance of their Jewish heritage,” she stated. “It’s easer to hear the message in stereo.”

Kommor wants to ensure that the next generation will also have a strong support system when they are ready to raise Jewish families in Louisville, so she has been a member of the Teen Programming Subcommittee of the JCL’s Program Review Committee that just finished its work.

“We realized that although many of us had good memories and experiences growing up in this Jewish community, times have changed and the goal is not to turn back the clock,” she said. Her subcommittee’s report, presented to the JCL Board at its December meeting, include a series of recommendations that “we hope will help nourish and maintain Jewish teens’ evolving Jewish identities.”

Both she and her husband, Michael, grew up in Louisville, and they feel they benefited from the foresight and investment of prior generations in the Jewish community. “Now, it’s our turn to figure out what this generation needs,” she said.

Kommor has been very active at The Temple. She is currently a Board member, involved with membership. She also attends a weekly Temple Scholars program, which offers adult learning with Rabbis David Ariel-Joel and Joe Rooks Rapport.

She also has a long history of involvement with JFCS. “A long time ago,” she said, “I started a support group for Jewish children with learning differences, which she led for a couple of years.

Today, she is also a volunteer driver for JFCS’ PALS program, which provides affordable transportation for seniors and those with disabilities who are unable to drive.

Although she is not currently working, she is a licensed clinical social worker, a licensed marriage and family therapist and a licensed alcohol and drug counselor. She worked for Seven Counties Services.