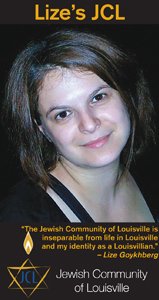 For a young woman, Lize Goykhberg’s life has been filled with upheaval and change, but the Jewish Community of Louisville has been a constant for her, anchoring her to Louisville and to Judaism.

Born in Kiev in the former Soviet Union, Goykhberg and her family arrived in Louisville when she was 11, and like many of the young immigrants the Louisville Jewish community welcomed and resettled, she attended Eliahu Academy.

For high school, she chose to attend St. Francis High School downtown. “My father regularly teases me about going to a Catholic High School,” she said.
After graduation, she attended Indiana University, Bloomington, where she majored in criminal justice and political science.
When the Goykbergs lived in Louisville, she explained, “My family belonged to Adath Jeshurun, but my father, in a burst of individualism, belonged to Anshei Sfard.”

As much as the family enjoys Louisville and feels connected to the community, they left the city in 1996 to pursue business interests in Indianapolis.

Goykhberg took a year off her studies to work for Vail Resorts in Breckenridge, CO.

After graduation, she revisited all the places she had lived, but only Louisville felt like home, so she returned to attend Law School at the University of Louisville. “Only Louisville called out to me and embraced me when I returned,” she said.

She credits Cantor David Lipp and Marta and Jonathan Ziskind with helping her reconnect when she returned to the city. Cantor Lipp, she said, went “so far as to accommodate my school schedule to invite me to Seder because he knew I was alone.”

The Ziskinds, she continued, “were very helpful. They showed me the Sabbath ritual and reconnected me to Judaism.

“It is Louisville’s unique combination of Southern hospitality and the Jewish focus on community,” that spoke to Goykhberg. The community’s “embracing of its occasional prodigal members that makes me value the JCL, and as a result, any community service I do is targeted at the JCL.”

Goykhberg is active in Hillel and serves as its representative on the JCL’s Jewish Community Relations Council. Through Hillel, she attended the Jewish Federations of North America’s General Assembly last fall and will be going to TribeFest in March.

When she was growing up in Louisville, her parents, Genie and Joseph Goykhberg, were very involved with the Jewish Community Federation (a predecessor organization to the JCL). “Their enthusiasm embarrassed me.” She stated. “Now, I understand what it meant to them.”