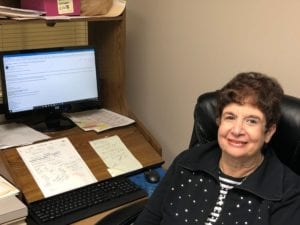 Diane Sadle has catered to an active, travel-enthused group of older adults during her tenure as The J’s senior adult director. (Community photo)

When Diane Sadle took over as senior adult director of The J (then called the Jewish Community Center) in 2002, she inherited a group of members largely in their 80s and 90s, who stayed at the center, taking part of in-house programming.
What a difference 17 years make.
Today, as Sadle prepares for her retirement on Dec. 31, she caters to a group she describes as “younger seniors” – people on the move who want to travel, exercise, think and be as active as they were when they simply were “younger adults.”
In other words, the Baby Boomers have arrived.
“We feel the future is in the Baby Boomer population,” Sadle said, “and we’re trying to do programming at The J to bring Baby Boomers in.”
Enter a project started on her watch called “High Time,” which has taken her seniors to Nashville, Gatlinburg, Pigeon Forge, Chicago Florida, Atlanta and Mackinac Island.
They also take at least one day trip per month.
“The seniors wanted to travel, and they didn’t want to do it on their own,” Sadle said. “They wanted someone else to do the driving.”
Since High Time’s inception, the trips have attracted 40 to 50 people per getaway; the day trips, 25 to 45.
In addition, her seniors go on dining excursions, see plays and exercise in classes arranged by Susan Kwasny.
Working out and getting out are not mutually exclusive ideas, Sadle said. To travel, “one needs to be fit.”
Margot Kling, senior adult committee chair, attributes the energy in the senior program to Sadle.
“It’s been tremendous,” Kling said. “We have every religion, every color; it’s really a great diversified program. I don’t think things happen mechanically. I think there always has to be someone behind it, and Diane has been very instrumental.”
High Time is one of Sadle’s proudest achievements as senior adult director, but it’s hardly her only one. As the head of program, she interacts with federal and state agencies and NPOs that serve her clients. She oversees the kosher kitchen.
She still arranges traditional in-house programs: Lectures, musical performances, lunches, Jewish holiday celebrations.
Most important, she offers a pair of sympathetic ears to her clients, who still wrestle with life’s challenges, and feel the gamut of emotions that go with them.
For that part of her job, Sadle draws upon her background as a school teacher.
“You have to have a lot of patience when our seniors are not feeling that well,” she said. “You have to lend an ear.”
Kling said Sadle’s personality has endeared her to the seniors.
“She listens, which is very important with seniors,” Kling said. “You know, some of these people have no one to talk to, and she sits there and listens.”
Sometimes, she wonders what kind of program would have attracted her parents to the senior center. That lodestar trends to guide her work at the senior center.
Originally from New Jersey, Sadle moved to Louisville with her husband, Elliott, in 1990. They raised two sons here: Justin, director of Jewish student life at the University of Kentucky, and Glenn, assistant manager of a Walgreens in Louisville.
“The J was a second home for the kids,” Sadle said.
She started at the then-JCC in 1992, working as part-time nutrition site manager for then Director Lynn Hamburg Goldstein. At first, she supervised just the lunchtime program, but she took on more responsibilities as she became full-time and assumed new positions.
“I did more than just the lunch,” she quipped.
Sadle isn’t sure yet what she’ll do after she retires, but she will follow husband Elliott’s lead.
“I’m probably going to volunteer. My husband still teaches Tai Kwon Do and volunteers at our synagogue, which I’ll probably do.
But she won’t leave the J entirely.
“I’ll be around,” she said.