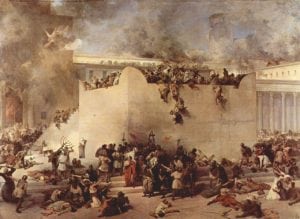 Tisha B’Av, which marks the destruction of the First and Second Temples, and subsequent tragedies in Jewish history, is traditionally observed by fasting. (painting by Francesco Hayez, 1866)

I don’t know if you ever heard the term, father’s heart. Chances are, you’ve heard the term mother’s Heart. Offhand, I can think of a few classic stories about the latter. Let me give you an example from my own family.
I recently visited my favorite niece in New York. She told me that her 12-year-old son, Aaron, was really “torturing” her.
“Until a few months ago, he was an angel,” she said. “Suddenly, he turned mean spirited and seems to enjoy talking back to me and yelling at me.”
I told her that I would teach his mouth a lesson. I enjoy having hot peppers with my dinners. More than once, he asked me to let him have a piece, but since I love him, I never acquiesced. “At dinner tonight,” I gloated to my niece, “I will offer him nice piece and right after he eats it and feels the burn, I will offer him a glass of water or a coke, which you should know will spread the burning sensation around his entire mouth.”
Instead of thanking me for punishing her verbal tormentor, she called out in anguish, “But he’s my son!”
A mother’s heart. But that’s not the story I want to tell. Soon we are going to commemorate Tisha B’Av, the saddest day in the Jewish calendar. A day when both temples were destroyed. It’s designated as a fast day. Every year, since I was 13, I remember my first Tisha B’Av fast day, which did not end well.
Like most kids, I was telling my parents that I wanted to fast on Yom Kippur, but my wise father didn’t let me, saying that would observe after my 13th birthday. To mollify me, he suggested either skipping breakfast or all sweets for that day. I celebrated my bar mitzvah in May and in August when Tisha B’Av occurs (This year, it begins on July 31). I could finally fulfill my desire to fast.
Be careful what you wish for. The days are very long in August. Add to it, the Tel Aviv heat and no air conditioning in most houses in those days and you can appreciate the difficulty.
Unlike Yom Kippur, Tisha B’Av is a working day. As I was getting painfully hungry, I was trying to kill a couple of hours going to an afternoon movie. Big mistake! The movie was Attila the Hun, starring Anthony Quinn. During one scene, he was being served a wild turkey, which he ravaged, stuffing pieces of meat into his mouth. My stomach was growling so loud, I was afraid people around me could hear it.
After the movie, I went to see a friend. When I returned home that evening, one hour remained before the fast ended. I sat on the balcony reading a book, when the smell of my mother’s delicious cookies tickled my nostrils. There was no aura of Yom Kippur; it was a regular day with people walking, driving cars, playing radios, which explains why I completely forgot about this special day.
I walked into the kitchen where an inviting tray of delicious, warm cookies winked at me. I picked up one, took a big bite and three seconds later let out a scream of agony and despair.
My mother rushed into the kitchen to find me standing there holding the other half of the cookie, tears running down my cheeks. Assuming I must have bitten my tongue, she asked me, “are you OK?”
“I forgot… I forgot,” I replied. “I’m fasting and there is another half an hour before the fast is over.”
“Oh, it’s alright,” she said. “It’s absolutely OK. In the eyes of God, it counts as if you fasted the entire day.”
Really? Are you sure?” I asked through my tears.
“Absolutely,” she reassured me.
Shortly thereafter, my father came home, smiled at me and said lovingly, “C’mon, boychick. Wash your hands and let’s sit down to eat.”
As we sat down, he said, “How does it feel to fulfill this mitzvah for the first time in your life?”
I mumbled clumsily, then I told him what had happened, adding quickly, “but mom said that it’s absolutely OK, and that it is counted as if I completed the fast. It’s true, isn’t it?”
His joyful expression turned to disappointment. “I’m afraid not. I guess you will have to wait for Yom Kippur.”
See what I mean?
(Moshe Ben-David lives in Louisville.)