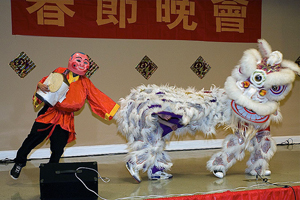 Chabad of Louisville will continue its 25 year tradition by hosting a Purim celebration for the entire community.

In recent years the focus of this celebration has been “Purim Around the World,” featuring foods, customs and traditions of Jews living in places such as Jerusalem and London. This year’s celebration will focus on the Jews of the Orient.

Many people have heard of the traditional Chinese and Vietnamese called “The Lion Dance,” which is said to bring good luck and fortune to all who are present, but most Americans have never seen this spectacle. At “Purim in the Orient,” Vietnamese dancers from the Louisville Lion Dance Team will perform a reenactment of The Lion Dance.

The festivities in the Grand Ballroom of Louisville’s Hyatt Regency on Sunday, February 28, will begin at 5 p.m. with face painting activities for children, the debut of “Lamp Lighter,” and the traditional reading of the Megillah and Mincha. At 6 p.m., the ballroom doors will open for Jewish music and a Kosher dinner highlighting Oriental traditions and culture.

A special feature of this year will be an audio-visual presentation about Rabbi Gabi and Rivka Holzberg, of Blessed memory who were killed by terrorists while serving the Jewish community in Mumbai, India.

The cost for the entire evening, including dinner and entertainment, is $25 for adults and $12.50 for children 12 and under. There will be a 10 percent discount for every person in full costume.