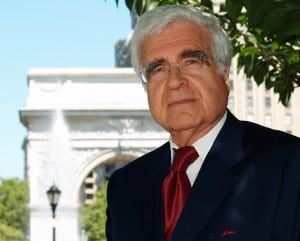 On October 30, 1915, Ferdinand Friendly Wachenheiemer (the co-creator (with Edward R Murrow) of the television documentary concept in 1948) was born in New York City. Fred Friendly (his changed name) was also the president of CBS News (1964-66).

Almost 100 years later, this year’s Brandeis Medal Recipient, Prof. Arthur Miller, carries on Friendly’s legacy, using the technique of a lively interchange of ideas. In recognition of his commitment to issues of privacy, a value for which Justice Louis D. Brandeis was well known, Miller will receive the award on Wednesday, April 8, at the annual dinner at the Seelbach Hotel.

Instead of giving the traditional individual presentation, Miller will engage a panel in a policy debate about complex issues related to privacy that affect people in their daily lives, using the Fred Friendly-style seminar.

The participants will be presented with a hypothetical that encourages them, through Miller’s probing, to wrestle with these issues. The panelists, who represent a wide spectrum of perspectives and experience, are Hon. Denise Clayton (Kentucky Court of Appeals); David Jones Jr. (president Jefferson County Public Schools Board of Education); Greg Haynes (Wyatt Tarrant & Combs); Betty Bayé (journalist and commentator); and Bill Stone (Louisville businessman and active participant in a range of civic affairs).

Stone and Jones are well known in the Jewish community. Jones received the Jewish Community Center’s 2014 Blanche B. Ottenheimer Award, given to a leader who has made a difference, improving the life of Louisville, Kentucky and beyond. The recognition was given because of his commitment to education and his leadership within Jefferson County Public School System. Stone has been a longtime leader in within the Jewish Federation of Louisville, currently serving as a member of its Jewish Community Relations Council.

Members of the Jewish community know well the importance of free speech and association and the concerns that arose during the Red scare of the McCarthy era. Friendly may be most well known for a 1954 airing of the “See It Now” documentary that revealed the work of Sen. Joseph McCarthy and is credited as a catalyst for McCarthy’s loss of power.

He created the concept of “Fred Friendly Seminars” in 1966 at the beginning of the public television era. In 1988 he produced and hosted the PBS Series, “Ethics in America,” which used the style of having leading thinkers address current ethical issues. In the 2005 movie, Good Night, Good Luck, George Clooney played Fred Friendly.

Miller has been a host and facilitator for many Fred Friendly-type televised programs and regularly plays that role for public events. These programs, which have been described as like “trying to juggle on a roller coaster,” demonstrate Miller’s ability to orchestrate a thoughtful and entertaining discussion among individuals who bring a range of perspectives and experiences to the table.

Miller is known for his early work on privacy, recognizing as early as 1971 the potential for technology and data banks to have adverse impact on individual privacy. His work on PBS and elsewhere as a “teacher of the law to the general public” reflects Justice Brandeis’s beliefs in educating the public about legal matters.

Recipients of the Brandeis Medal, which honors individuals whose work reflects the justice’s ideals of public service as well as his example of civility and professionalism, include Mel Urofsky (2010), Associate Justice Ruth Bader Ginsburg (2003) and Associate Justice Stephen Breyer (2004).

The co-chairs of the Brandeis Medal Committee are Profs. Leslie Abramson and Laura Rothstein, both members of the faculty at the Brandeis School of Law at the University of Louisville.

The event is open to the community and includes dinner. Tickets are $60. Please register at www.law.louisville.edu or call 502-852-1230.

The JCC is celebrating 125 years in the Louisville community. Generations of people have considered the JCC an important part of their lives and continue to do so. You are invited to celebrate with birthday cake and a special guest …

Drew Corson AZA by Joey Shuster Drew Corson AZA worked hard on recruitment in the past month. The board engaged in many activities with the AITs (new members) varying from ice skating with the Jay Levine’s new members to explaining …

During the Holocaust, those who opposed Nazi actions against the Jews were as vulnerable to persecution as the Jews themselves, and many paid the ultimate price. Dietrich Bonhoeffer, a German Lutheran pastor, theologian and anti-Nazi dissident, was among them. The …