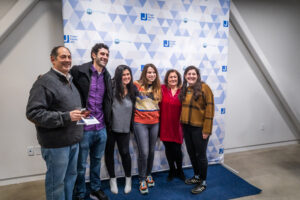 The Reskin family poses for a picture with comedian Ariel Elias at the meet and greet after the 8 p.m. show.

Between her two shows this past Saturday night (Jan. 14) at the Trager Family JCC, comedian (and former Lexington, Ky. resident) Ariel Elias mingled with audience members during a happily freewheeling Meet-and-Greet.

Asked if she had any performance boundaries, she answered that pretty much any area is potential fair game, “as long as it’s funny.” And certainly not stale.

“I think part of the problem with some comedians when they want to talk about something controversial,” she said, “is that they’ll just rely on the fact that it’s controversial, as opposed to actually saying something new.” Though her material includes references to her liberal leanings, Elias tends to avoid overtly political humor.

“You have to be careful,” she cautioned. Indeed, one of her on-stage forays alludes to abortion, a reference that prompted the now-infamous beer-can-flung-at-her incident last year. “I tend not to talk about politics…because I usually find I’m more interested in what we all have in common, as opposed to what divides us.”

Asked what advice she’d give to a 20-year-old seeking to break into the comedian biz, Elias had a simple answer: open-mic nights, where any aspiring comic can put their head in the lion’s mouth (a.k.a., a room full of unknown humans).

“The great and terrible thing about standup is that there’s no barrier to entry – you kind of just have to do it,” she said. And “you do, unfortunately, have to do it really badly in front of a lot of people for a long time, which is brutal.”

Still, it’s not the end of days if you bomb. “So don’t be afraid,” Elias said.

“What’s going to motivate you to keep getting better is to show where you feel like you didn’t do your best. And when you go back home and rewrite everything,” real progress becomes possible. “It’s failure that makes you a better comedian,” she said.

Someone else Saturday wondered if Elias had seen any of “Hacks,” an HBO Max series about a veteran Vegas female standup comedian whose best years may be behind her.

“Ok, I watched a few episodes of ‘Hacks,’” Elias said, “and then it got very difficult for me. It’s really hard to watch someone live your dream with a lot more money.”

And then there’s the issue of shows with Jewish elements, except the principal actors involved aren’t. “It’s very hard for me to watch a show that is so Jewish not being played by Jewish actors,” Elias said.

“You know,” she continued, “those are things I heard a couple of times when I moved to New York,” instances where “somebody would tell me they were ‘Jewish’ because they grew up around a lot of Jews. And because I did not grow up around a lot of Jews, it made me feel incredibly inferior. I felt like it took away from the actual experience of being Jewish. It’s not like just going to Bar and Bat Mitzvahs of your friends and eating bagels.”