Things have not always been this bad.
Until recently, incidents of anti-Semitism have been at historic lows. Jews generally felt safe in their own communities, in their Jewish institutions, and in their houses of worship.
But things are awful right now, and this past month is a microcosm of how far we have fallen in such a short time.
In Beverly Hills, California, a Persian synagogue was desecrated by vandals and the visuals were shocking. Pictures of Torah scrolls defaced and strewn about, relics destroyed, and prayer books ruined were scenes reminiscent of a very different time and place, not something happening in Beverly Hills in 2019.
At Indiana University, three Jewish students were assaulted while trying to enter a fraternity party. Anti-Jewish epithets were hurled at the students involved. IU is investigating.
Shockingly, at the White House Chanukah party, a pastor who once claimed Jews (and other non-Christians) were going to hell was introduced by the president and welcomed with open arms there. 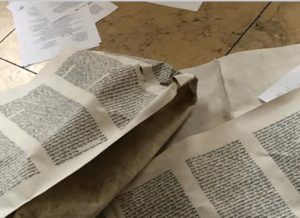 Torah scrolls were unrolled crumpled, torn and left on the floor of the Nessah Synagogue in Beverly Hills during the vandalism of the building on Saturday, Dec. 14. (photo by George Haroonian)

And last week, we saw the horrible tragedy in Jersey City, New Jersey, where two gunmen killed a police officer and then aimed their guns inside a kosher supermarket, killing three more people. The situation could have been far worse, with authorities claiming that the real target of these killers was a Yeshiva next door with over 50 children inside. Thankfully, the quick work of the brave police officers prevented an even greater massacre.
These are just snapshots of global increases in anti-Semitism, and it is not just anecdotal. Statistically, there are massive increases in anti-Semitic acts all over the world. (A Jewish cemetery was defaced in France last week as well.)
This follows an election in Great Britain where Jeremy Corbyn, the leader of one of the Labour Party, has utterly failed to deal with a systemic and pervasive anti-Semitism problem in his ranks and who is complicit in anti-Semitic acts and statements himself. He was deemed such a threat to the Jewish community that British Chief Rabbi Ephraim Mirvis took the unprecedented step of urging people not to vote for the Labour Party, and over half the Jewish community was considering leaving Britain had Corbyn won.
There are no easy answers here, but there is room for a small amount of optimism. Corbyn’s party was ultimately defeated – soundly – (although his opponent, Boris Johnson, has said deplorable things about Muslims; the Jewish community should not embrace him until he apologizes and those remarks are retracted).
Countries such as Britain, France, Germany and Austria have accepted the International Holocaust Remembrance Alliance definition on anti-Semitism, which provides examples of this specific form of hatred, including the delegitimization of Israel.
Community support after acts of anti-Semitism are heartwarming and important. But these bright spots shouldn’t lull us into a false sense of security. Something is terribly wrong, both here and abroad. Hatred of the “other,” whether that other is Jewish, Muslim, black, Hispanic, female or gay, is on the rise.
We can hope and pray that 2020 will see a marked decrease in anti-Semitism and a steady increase in acceptance of all the different people the world over, but it’s not enough.
As Jews, it is our obligation to call out hatred wherever and whenever we hear it. Whether it’s our state and national leaders, our media, even our clergy (see the D’var Torah column, page 2), hate speech, let alone overt acts of hatred, must be demonstrably opposed. Winks and nods, formal statements dismissing hate speech as “inappropriate,” are no longer enough. If hatred is to be penned up and placed back in its dark hole (it can never be truly eradicated), then we must all take a stand.
Jersey City, Beverly Hills, these are just the latest warnings.