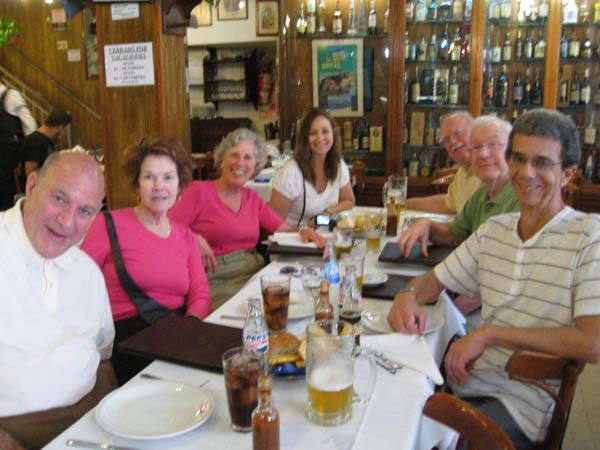 When a vacation becomes a religious experience as well, you can feel twice-blessed, and so it was with the lucky eight who traveled to South America recently with Adath Jeshurun’s Rabbi Robert Slosberg and his wife, Deborah. Our 14-day adventure, which began in Chile and ended in Brazil, introduced us to the fascinating sights and sounds of the region’s Jewish and secular sites in a way that was uniquely enjoyable, enlightening and entertaining at the same time.

The travelers: Phyllis Adams and Bruce Blue, Rhoda and Bernard Faller, Donna and Stanley Rosenthal, the Slosbergs and my husband, Michael and I, caught up with one another in Santiago a few days before our Star Princess Cruise began. While many of us were aware that large Jewish communities exist in many parts of South America, we had little idea about the security involved in ensuring their freedom of worship. Every synagogue we visited had guards stationed at the door and heavy iron fences in place to keep out those considered potential risks.

We first encountered the issue when our guide (with one exception, all guides were Jewish) accompanied us to Comunidad Israelita de Santiago, a spectacular Masorti (Conservative) synagogue with a magnificent building, a vast amount of land and underground parking for 300 cars! While she had our passport numbers, she still had to do some talking before the armed guards at the gate would let us pass. In addition to their very large education building, Rabbi Marcelo Kormis pointed with pride at the Holocaust Memorial sculpture and a three-dimensional marble figure of a “shin” displayed on the grounds.

Before leaving the city, we stopped at Bomba Israel, the Jewish Fire Brigade, which recently celebrated its 50th anniversary. The all-volunteer squad (only the driver is paid) is highly regarded in the community and responds to more than 500 incidents a year. The station also runs a Youth Brigade to train future firefighters and is currently conducting a fundraising campaign to replace its 1982 vintage fire truck.

Our next stop was the city of Valparaiso, a short distance from Santiago, where we visited a more modest Masorti congregation, Comunidad Israelita de Valparaiso, and had a guided tour with Rabbi Efraim Rozenzwaig. We again encountered armed guards at the door.

The synagogue buildings include a well-maintained Day School and a beautiful old mansion with the original wood floors, thick plaster walls and old chandeliers with baroque fittings. How sad to think that in this day and age, Jews in South America still have to pray in virtually unmarked buildings with guards stationed behind heavy gates at their entries.

We boarded the ship and after three cold, rocky days at sea, we landed at Punta Arenas (across the Strait of Magellan from Tierra del Fuego, the largest southern-most city in South America and gateway to Chilean Patagonia). We toured a cemetery where many Conversos (Jews who centuries ago were forced to convert to Christianity and whose tombstones are marked with both a Jewish star and a cross) are buried. A quick stop in Ushuaia (oo shoo-AYE-ah) with its bright red sightseeing train completed that leg of the trip.

After safely navigating around Cape Horn, the most southerly point of South America, we had a delightful visit in Stanley, Falkland Islands, where they are still preserving the memory of the British invasion of 1982 with a military museum. Penguins and locally-made handcrafts are seemingly its only points of interest.

Our visit to Buenos Aires was a delight. Our guide, Pedro Warberg, offered a history of the city’s Jewish community and a look-see at touristy areas like La Boca. At lunch in an Argentinian steak house, our group was seated next to a couple who took our pictures at the table. They introduced themselves and it turned out the husband was raised in Louisville, attended Ballard High School and was a pilot for American Airlines! What were the odds of that happening!

After seeing the city’s beautiful government buildings, we stood behind some trees to view the Central Synagogue, the oldest and largest one in Buenos Aires. Tight security prevented us from going any closer. Pedro explained the two hedges sitting on concrete platforms in front of the building were strategically placed there to keep would-be attackers at bay. We finished off the day with a stop at the Recoleta Cemetery to see Eva Peron’s grave.

Our visit to Montevideo, Uruguay (located between Brazil and Argentina), was my favorite of the entire trip. The city, which traces its Jewish history back to 1880, has 10,000 Jewish residents and a number of synagogues and Day Schools. Our guide, Rita Vinocur, the daughter of well-known Holocaust survivor Ana Vinocur, is the executive director of the city’s Holocaust Museum. We began our visit with a very brief stop at Montevideo’s first synagogue where, for security reasons, we could only step off the bus, snap a photo and take off again. So sad!

We toured Rita’s museum and then saw Independence Square and the Town Hall Museum in the old Governor’s House. After Rabbi Ariel Kleiner provided a tour of the Nueva Congregacion Israeliata De Montevideo synagogue, we joined him and members of his board for lunch. Adath Jeshurun provided a gift to the congregation to help with their efforts to create their own prayer book. Later in the afternoon, we spent time at the very moving Holocaust memorial sculpture garden on the beach. Dedicated to the Shoah, it was a gift to the Jewish community from the people of Montevideo.

Our last stop, Rio de Janeiro, home to 40,000 Jews, is absolutely beautiful – white sandy beaches, gorgeous hotels and tons of skinny young things carrying surfboards and wearing bathing suits that barely covered the necessities! We enjoyed lunch at a genuine Brazilian steak house before touring the Grande Templo Israelita (Great Jewish Temple), one of the first synagogues in the city (completed in 1935 and renovated in 1985). The Jewish community has since left the synagogue area and it is only open for High Holy Day services and tourist visits.

We returned home with many memories and a renewed appreciation for the freedom we have in America to worship as we choose, freely and openly. I don’t think any of us will ever take that for granted.