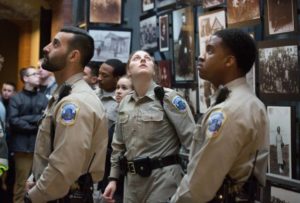 Visits to the U.S. Holocaust Memorial Museum by police is a major part of ADL Holocaust training. (photo provided by the ADL)

The Anti-Defamation League (ADL) will begin offering training on the Holocaust to the highest levels of Kentucky law enforcement early next year, state officials and Jewish leaders say.
“They (the state) recognize that since this has come up twice means there is a problem,” said Beth Salamon, chair of the Jewish Community Relations Council, “which is why they are looking to us and the ADL to do a lot more intentional education.”
ADL Regional Director James Pasch met Wednesday with officials from the governor’s office, the Kentucky State Police (KSP), the Department of Criminal Justice Training (DOCJT) and the Jewish Federation of Louisville to lay out a plan for raising awareness of the Shoah in a government sector jolted by recent revelations that anti-Semitic symbols and statements have been found in training programs.
Manual RedEye, the student newspaper of duPont Manual High School, recently reported that a six-minute training video made earlier this year by the DOCJT contained an image of the sonnenrad, a Nazi-appropriated symbol.
And on Oct. 1, the RedEye made national headlines when it reported that a training slideshow used by the KSP Academy contained quotes from Adolf Hitler and Robert E. Lee, and urged cadets to become “ruthless killers.”
Normally, ADL training, which has been offered to police departments around the country and to the FBI, has included in-person sessions and visits to the U.S. Holocaust Memorial Museum (USHMM) in Washington, D.C. But the COVID pandemic means modifications will have to be made.
Michael Brown, secretary of the Executive Cabinet of Gov. Andy Beshear, has tasked the KSP and DOCJT commissioners to work out the logistics of the training with Pasch, allowing the program to begin early in 2021.
“I can’t wait for COVID to calm down to get this initiative going,” Brown said.
At first, the training will focus on supervisors, trainers, instructors and field commanders, Brown said. “It’s going to be the whole hierarchy of these agencies to start with.”
Brown, who is overseeing a review of training materials used at academies and programs overseen by state, said supervisors and educators must learn to recognize anti-Semitic or racist material. He noted that some symbols, like the sonnenrad, are not as “immediately recognizable” as the swastika.
“Any review of any material we’re going to do would be woefully lacking if we don’t know what we’re looking for,” he said. “To determine what we’re looking for, we have to turn to outside expertise.”
Local Jewish leaders, including JCL President and CEO Sara Klein Wagner, Jewish Community Relations Council Director Matt Goldberg and Salamon, all of whom were at Wednesday’s meeting, have been invited to sit in on the training sessions as observers when they begin.
“Secretary Brown asked the three of us if we would participate,” Wagner said. “We have confidence after these initial meetings with government leaders, and now Secretary Brown, that obviously they are taking this seriously and we are grateful for their proactive response.”
She added the JCL will continue to play an active role in the process. “It’s not a one-and-done conversation.”
Pasch could not be reached for comment Thursday, but Community has obtained an overview of ADL training, entitled Law Enforcement and Society: Lessons of the Holocaust, which the ADL developed with the USHMM.
The training addresses the “core values” of the law enforcement profession, community engagement and public trust, according to the overview.
The training has been offered in Dallas, Houston, Los Angeles, Washington, Nassau County, New York; and St. Petersburg, Florida.
Goldberg said the training would be offered on Zoom in smaller groups (approximately 25 per training block) and would revert to in-person training once the pandemic passes.
In addition to the JCL leaders, Brown and Pasch, Acting KSP Commissioner Phillip “PJ” Burnett, Jr. and DOCJT Commissioner Nicolai Jilek took part in Wednesday’s meeting.

By Lee Chottiner Community Editor Snaking more than six miles through the Upper Highlands and other neighborhoods hugging the Watterson Expressway, a series of 238 PVC pipes attached to utility poles, plus a highway wall, are making it easier for …

JCRC Scene Matt Goldberg There is no getting around the fact that national elections are a breeding ground for animosity and grudge-holding. This year was no exception. It felt like we were in election mode for well over a year. …