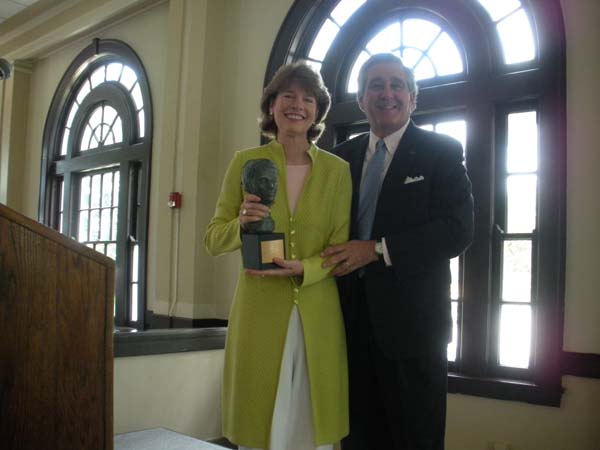 The highlight of the National Council of Jewish Women, Louisville Section’s closing meeting on Monday, May 24, was the presentation of the Hannah G. Solomon Award to Madeline Abramson. The luncheon, held at the Olmsted, also included a review of the year, information about the upcoming Gilda’s Club Camp and the election of directors for the coming year.

Mayor Jerry Abramson, a former Solomon Award winner, made the presentation to his wife. “The Hannah Solomon Award,” he said, “focuses on dedication. It focuses on hard work. It focuses on community volunteerism.” All of which, he noted, Madeline has managed while being wife, mother and first lady of Louisville.

Louisville has 700,000 residents, the Mayor said, but not all its residents are citizens. Many of them get up, engage in their daily routine of eating, work and family, and repeat the process the next day. Citizens, however, go above and beyond, getting involved and engaged in the community.

Madeline, he said, “sets the standard for citizenship.

Indeed, Madeline Abramson’s volunteer activities are so numerous that neither the Mayor in presenting the award nor she in accepting it could list them all. From social services through institutions like Maryhurst to support for the Arts like chairing the Board of the Kentucky Center for the Arts, to health and public safety to education to the Jewish community, she has served the community well, attending to the big issues without overlooking the details.

In accepting, Madeline Abramson said, “It hardly seems fair to receive an award for doing the activities I enjoy.”

Her own involvement, she explained, began as a teen with her youth group and continued as an adult with the arts and Maryhurst. With the arrival of her son, however, things changed. “I was tempted to turn inward,” she said, but then she felt that Hannah Solomon spoke to her saying, “Your plate is full, but you still have to find a way to take care of the women, children and families who don’t have what you have.” Solomon pointed her toward NCJW.

Section President Leni Sweet acknowledged many of NCJW’s local leaders who helped the Section have a successful year and touched on many of the highlights.

The Nearly New Shop, supervised by Nikki Russman and Hilary Catapano, has thrived despite being only partially open for three months as the building was renovated to meet new fire codes. The shop also had successful Fashion Encore and Spring Fling events.

With Judy Borinstein and Mindy Klein chairing the Ways and Means Department, the Section is in the midst of its personal giving campaign and had a successful Shopping Spree discount card program. They also had a small fund-raiser at Lee Robinson Interior Design that enabled the section to provide a “Day of Beauty” including manicures and an assortment of beauty products for some Maryhurst girls.

In addition, the Section does several direct service projects each year.

“Last summer,” Sweet reported, “we had a very special project where we helped the Jefferson County Hall of Justice raise $30,000 to expand their Domestic Violence Intake Center.” Led by Jane and Bert Emke, the Section, in conjunction with other community groups, raised $100,000 and were able to create a remarkable facility.

Another special Section project is the Gilda’s Club Summer Camp. Later in the program, project chair Judy Shapira explained that the camp provides the opportunity for approximately 30 children, ages 6-11, who are coping with cancer themselves or with a family member with cancer to just be children and have fun. This year’s program will focus on organic foods and will involve several field trips and will conclude with a fund-raising carnival.

Shapira called on the many chapter members present to step forward and volunteer to help with this year’s camp, which will run from June 28-July 2.

Future plans in this area include a candidates forum for the mayoral and senate races to be cosponsored with the Jewish Community of Louisville’s Community Relations Council and a rally in Frankfort commemorating the 90th anniversary of the women’s suffrage movement.

For the Membership Department, Sweet acknowledged Phyllis Shaikun who planned the opening meeting with Jewish Hospital and St. Mary’s HealthCare Senior Vice President Debbie Molnar as well as an event for prospective members and this closing event.

She also recognized Judy Shapira, chair of the Administrative Department; Jamie Ingram, the office manager; and Madeline Abramson, Board secretary, who listens to the many ideas NCJW’s leaders put forth and distills them into a single cogent thought.
Ellen Shapira presented the 2010-11 budget, which the members present approved.