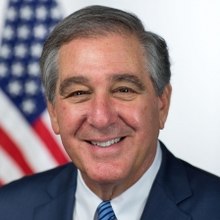 Former Louisville Mayor Jerry Abramson has joined the University of Louisville Board of Trustees.
Abramson, who attended his first meeting of the board in September, was named to the panel in late July by Gov. Andy Beshear. He replaces Matthew Barzun, whose unexpired term will end on Jan. 13, 2027.
Abramson, who currently serves an executive-in-residence at Spalding University, said he consulted with Spalding President Tori Murden McClure and the school’s leadership team before accepting the appointment. “No one saw a conflict,” he said.
As a trustee, Abramson plans to support UofL President Neeli Bendapudi and her leadership team “in expanding UofL’s excellence in academics, the quality and diversity of its student body and enhancing the student experience while on campus.”
“A great city needs a strong research university, and a great research university needs an economically and culturally vibrant great city,” he added.
A Louisville native, Abramson, 75, was the 47th mayor of Louisville from 1986 to 1999, and the first mayor of Louisville Metro from 2003 to 2011. He went on to serve as lieutenant governor of Kentucky under then-Gov. Steve Beshear from 2011-14 when he left to become White House director of intergovernmental affairs under President Barack Obama.