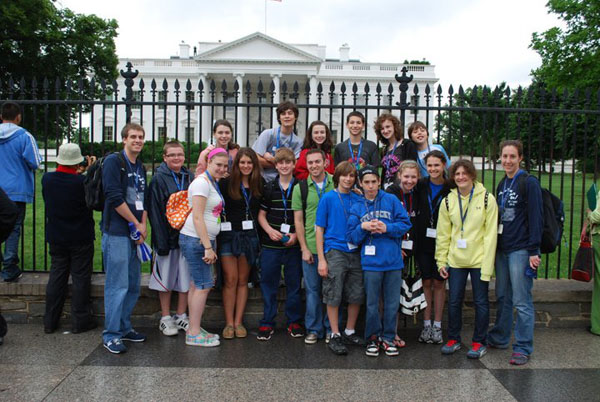 Panim Horizons, a new program offered by the Panim Institute of BBYO is an educational touring experience in Washington, D.C., designed especially for middle school students, and a contingent of 14 seventh graders from Louisville were among those who experienced the nation’s capital with an emphasis on Jewish history, activism, and tikkun olam.

Washington is the ideal location to learn about the story of America and explore the founding values of our country. The Louisville delegation joined with middle school students from New Jersey, and Toronto, Canada, for three days of touring the monuments and memorials around the D.C. area. Panim Horizons combined these tours with discussions to ignite the students to link their Jewish values with the historical figures, moments, and decisions that make the United States what it is.

Sunday evening was spent at the Lincoln Memorial, where the group stood at the place where Dr. Martin Luther King Jr. delivered his famous “I Have a Dream” speech, and the Korean War Memorial.

Monday was a long day of exploring the institutions of democracy starting with the Capitol Building, the Supreme Court, and many of the Smithsonian Museums. That evening, we heard Jackie Rotman, a 19 year old college student, tell us about her dream and how it turned into reality. She motivated our group to dream it, and live it.

Jackie said the youth of today have all the power in the world and that they don’t have to wait until they’re adults to start something they believe in. Molly Schuster was so inspired she is planning on starting a chapter of Everybody Dance Now in Louisville, which is the organization Jackie started when she was 14.

Tuesday morning we began our day at the Jefferson Memorial and continued on to the Franklin Delano Roosevelt Memorial to cover the topic of “What Makes a Good Leader.” After a final stop at the White House, and the day’s activities stirred up a discussion back at the hotel about making yourself a good leader.

All 14 students learned something that they didn’t know before which was a goal of mine and the goal behind Panim Horizons.

Audrey Nussbaum said she learned “you don’t have to be an adult to make a difference in the world.”

Clayton Oppenheimer learned “the spiral staircase in the Supreme Court has 136 steps.”

Many of the seventh graders came back with a new outlook on their lives. Panim Horizons opened doors for them and the Jewish Community of Louisville helped them do it. Throughout our time in Washington, D.C. our group bonded together as Jewish teens and as future leaders with a vision and drive to make our city better and our country even better.