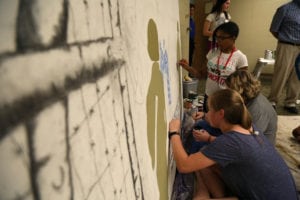 Teens from Western Kentucky University’s VAMPY program for gifted youth work to complete the latest in a series of Holocaust-themed murals completed by students in the program over the past 25 years. (photo by Alix Mattingly, Kentucky Center for the Arts)

Gifted teens studying at Western Kentucky University have been finding artistic expression through the Holocaust for 25 years.
That’s how long seventh to 10th graders in WKU’s Summer Program for Verbally and Mathematically Precocious Youth (VAMPY) taking the program’s Nazi Germany and the Holocaust course, have been creating life-size theme murals depicting one of the worst genocides in human history. Now, for the first time, those murals – 20 of them, anyway – will be traveling.
Thanks to a $72,000 grant from Jewish Heritage Fund for Excellence (JHFE), the murals are part of a three-city tour called the Never Again exhibit and starting in Louisville. They will be installed at The J from September 20-28 and will be open primarily to student groups during that time. The public may see the exhibit Sunday, September 24, from 4 to 6 p.m.
In addition to JHFE and The J, the Kentucky Center for the Arts and KET public television also are supporting the exhibit. Sketchbook drawings, these are not. The murals, which are done primarily in charcoal, are six feet tall by eight-nine feet wide, said Ron Skillern, the 2017 Kentucky Teacher of the Year, who has taught the course since its inception. All but the two latest are housed in specially built frames. “It’s as if you almost step into the image,” Skillern said. “I have seen people with tears running down their eyes, as they go through these images.”
These murals are not the works of individual artists. The entire class discusses what should be depicted on each canvas as well as the theme, but the actual sketching and painting are done by a group of five to six teens. “If you want strong opinions, get a bunch of good artists together,” Skillern quipped. “They have to debate and decide what goes on the canvas.” 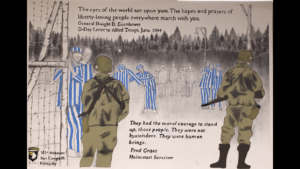 “Liberation” is the theme of the latest Holocaust mural created by teens in the VAMPY program’s Nazi Germany and the Holocaust class. This mural shows Army G.I.s liberating a concentration camp. Quotes by General Dwight D. Eisenhower and local Holocaust survivor Fred Gross drape the top and bottom of the canvas.

Liberation is the theme for this year’s artwork. It shows U.S. Army soldiers entering a concentration camp at the end of World War II and contains quotes by General Dwight D. Eisenhower and Holocaust survivor Fred Gross of Louisville. “They had the moral courage to stand up, those people,” Gross said of the Allies who liberated the camps. “They were not bystanders. They were human beings.”
Invariably, one student from each group steps up, assuming the role of coach. That teen, Skillern said, pushes the others forward, making sure the project is completed on time. For its part, the Kentucky Center is looping the exhibit into its Bearing Witness project, which provides teachers at its partner schools across the state extensive training in strategies and models for teaching the Holocaust. The murals are intended to help the students internalize the lessons from that period and perhaps apply them to issues and injustices today. “Rather than trying to fill students with information, it asks them questions relevant to their own lives,” Jeffrey Jamner, senior director of education & community arts at the Kentucky Center, said of Bearing Witness.
For example, he said students at Noe Middle School were asked to create an artistic response to a question: “What is your humanity footprint?” The students responded by looking at people who felt marginalized. Two girls choreographed and performed a dance about eating disorders and body image. “Those are the dots they connected,” said Jamner, who is the son of Holocaust survivors.
KET plans to produce a 30-minute video piece about the exhibit and will be taping scenes at The J and Noe, where a class will develop its own projects based on the exhibit. It also will post learning materials developed by Kentucky teachers at PBS LearningMedia, an online repository for teaching aids. “I think a lot of teachers want to teach about the Holocaust,” said Teresa Day, KET director of educational content development. “The idea is to provide high-quality resources that will help teachers in the classrooms.”
Founded in 1984 by WKU’s Julia Roberts, VAMPY accepts about 200 of the brightest students from around the world each summer to study an array of subjects. Subjects include Ancient Civilizations, Arabic, Chemistry, Computer Science, DNA and Genetics, Humanities, Mathematics and Presidential Politics. “They don’t just come to study Nazi Germany,” said Roberts, executive director of WKU’s Center for Gifted Studies, “but those who do, have a fantastic experience.”
Not every teen in Skillern’s course works on the mural. He divides the class into three projects, the other two being a mock trial of Adolf Hitler and a play about Anne Frank speaking as a ghost from the concentration camp where she died. The VAMPY program is intensive, he said. Unlike a standard high school class, in which he would teach a class for maybe an hour, kids in this program are his for six hours a day – plus a one-hour study hall – for three weeks. That puts a greater onus on each teacher to develop projects, Skillern said. “You plan, you plan, you plan.”