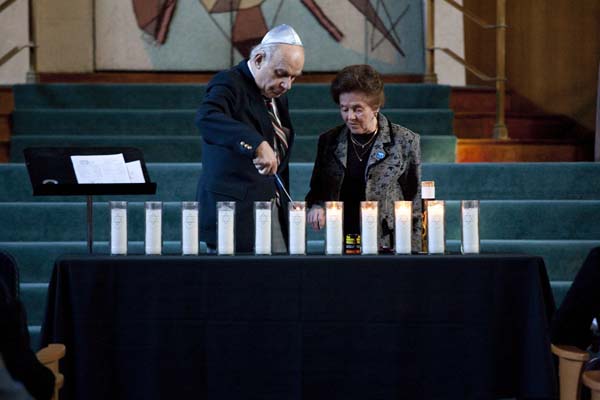 At Passover, we drank four cups of wine, diminished our joy by a drop of wine for each of the 10 plagues and joined our voices together to sing, “Who Knows One?”

Numbers were also an important part of the Holocaust. Eleven million people, including six million Jews, were slaughtered by the Nazis. And those who were not slain were carefully counted. The Nazis tried to dehumanize each person in the camps by issuing an identity number – tattooed onto each prisoner’s arm – to use instead of a name.

Each year, the Jewish Community of Louisville’s Yom HaShoah program has a theme, and this year, it focused on the numbers.

As people walked in the door, they were offered small blue buttons with the Hebrew word chai, life. Rabbi Robert Slosberg explained that each Hebrew letter has a numeric equivalent and the numeric equivalent of the word chai is 18; so with the number 18, we affirm life. 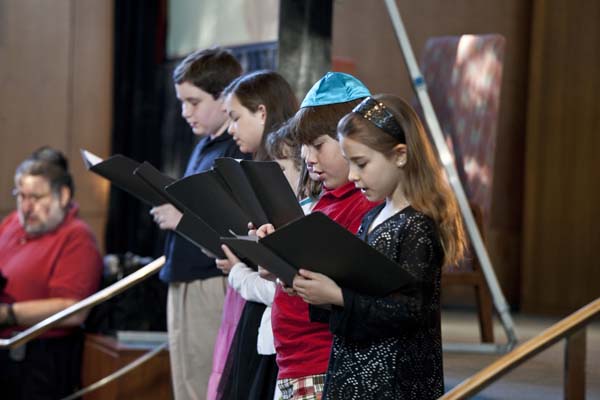 Six children from The Temple’s Sunday School and Kehila’s Middle School, accompanied and led by Cantor David Lipp tied the program together with verses from “Who Knows One?” The vocal ensemble Voces Novae and Cantor Hordes added a musical version of World War II resistance fighter Hannah Sennesh’s words, “One, Two, Three.”

The heart of the program, however, was the testimony of survivors about the numbers the Nazis had tattooed on their arms.

After a long ordeal, Leo Goldring arrived at Auschwitz only to be forced to wait in a long line for his number – 94280. And if that indignity were not enough, he recounted, “they took away our clothes” and issued others – often ill-fitting and worn – and put them in barracks. Within a couple of days the prisoners were put to work.

Ann Klein was born in Hungary, but she ended up in Auschwitz from June 1944-January 1945. After 3-1/2 days of traveling locked in a train and knowing that both her parents had been killed, she said, “I don’t remember getting my number,” but A-9140 was tattooed on her arm.

At first it didn’t bother her. So many people around her had numbers, no one paid any attention to them. However, when she came to the United States in 1947, Klein started to hide them. “I didn’t want to talk about them.” Later she had them removed, but for many years she hid the scars. “It took me a long time to be able to talk about it,” she said, but today, she frequently speaks to school groups and others.

Melvin Goldfarb was marked 98889. Almost 100,000 people had been taken to their deaths in Auschwitz before he was arrested. For him, the number was a stark reminder of torture, starvation and evil. By the time the liberators arrived, Goldfarb was so ill he had to be hospitalized for five months before he was released to a displaced persons camp. Eighteen years later, he had his numbers removed. He was the sole member of his family and one of only 145 out of 10,000 from his town in Poland who survived the war.

In 1942, Abe Jakubowicz recounted, he was among 28,000 taken from the Warsaw Ghetto. Only 2,000 survived, and he was among them because his mother told their captors that he was a carpenter. Later, others were instrumental in keeping him alive. An acquaintance pulled him out of a group of 650 who were taken to the forest and shot. A worker in the kitchens risked his own life to help Jakubowicz. He, too, had a number. 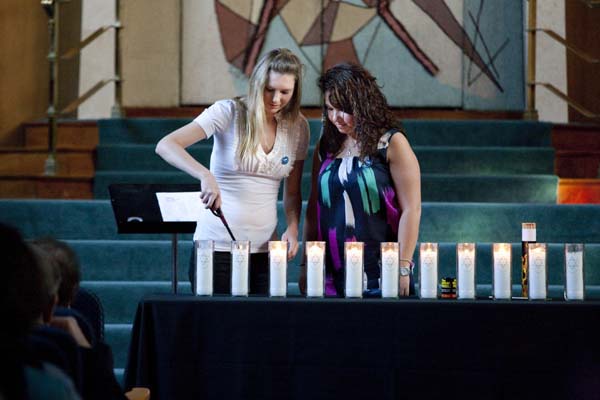 Young people participated in the program, too. As one white memorial candle was lit for each of the 11 million who were murdered, high school students counted the candles, introduced the candle lighters and enumerated those to be remembered.

Then there was time to remember.

Rabbi Joe Rooks Rapport and Rabbi Gaylia Rooks, introduced the mourner’s Kaddish, adapted for Yom HaShoah by Elie Wiesel, and Goldfarb read the Aramaic words to which the gathering responded with the names of concentration camps and the sites of massacres including the more recent atrocities in Armenia, Bosnia, Rwanda and Darfur. The names of those lost in the Holocaust and survivors who have since died were remembered at that time.

“The Nazis had a thing with numbers,” Rabbi Stanley Miles said, as he drew the program to a close. They tattooed numbers on arms and on the wooden rollers of Torah scrolls stolen from Europe’s Jewish communities. He challenged everyone to “keep the numbers in mind” because “each number represents a living soul – a living being, like us, created b’tzelem elohim,” in the image of God, and we cannot allow another Holocaust.

The program closed with Hatikvah and the Star Spangled Banner.

Special thanks to George Parker Jr. and Thomas Keefe.

Ed Weinberg is chair of the Jewish Community of Louisville. Leon Wahba is director of the JCL’s Community Relations Council. Tzivia Levin and Julie Hollander were the JCL staff Yom HaShoah coordinators,