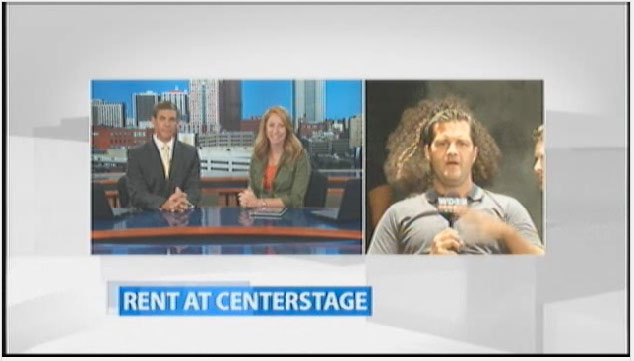 CenterStage at the Jewish Community Center launches a season of award-winning, thought-provoking theater with RENT, which will run July 12-29 in the Linker Auditorium (3600 Dutchmans Lane).

Based on Puccini’s La Boheme, the show ran for 12 years on Broadway and won both the Pulitzer Prize and the Tony Award for Best Musical.

Its tragic but uplifting story of a group of young artists struggling to meet the challenges of life in the time of AIDS resonated with a generation and continues to move audiences today.

Jonathan Larson wrote the book music and lyrics for the show.

His death, at age 35 on the eve of its first public performance at the New York Theatre Workshop, added to the searing emotion of the show.

Filled with upbeat rock songs and heartrending ballads, RENT tells the story of Mark, a filmmaker, and Roger, a musician, who are struggling to make ends meet when Mimi stumbles in their apartment and into Roger’s arms.

Meanwhile, Mark’s ex-girlfriend, Maureen, now dating Joanne, is planning a major protest, and their friend Collins has struck gold in his discovery of Angel, a street performer, with whom he quickly falls in love.

Their battles with AIDS, rent, vocation and love tear the friends apart and bring them back together again as they seek the meaning of life.

Extending that mission, CenterStage will collect donations on behalf of several local HIV/AIDS charitable organizations at each performance.

KentuckyOne Health has named Valinda Rutledge as Market Leader Louisville and president of Jewish Hospital effective July 23. She will have responsibility for the oversight of the Jewish Hospital downtown medical campus, Sts. Mary & Elizabeth Hospital, Our Lady of …

[by Emily Levin] From June 25-29, the National Council of Jewish Women (NCJW), Louisville Section sponsored a summer camp for Gilda’s Club of Louisville. Camp Gilda is for children with a cancer-connection. The camp helped children, ages 6-11, develop skills …

Join us for a snack, a story and some splash time in the JCC Family Pool on Thursday, August 9. Story and snack starts at 6:30 p.m. at the JCC Family Park followed by time to enjoy the pool at …