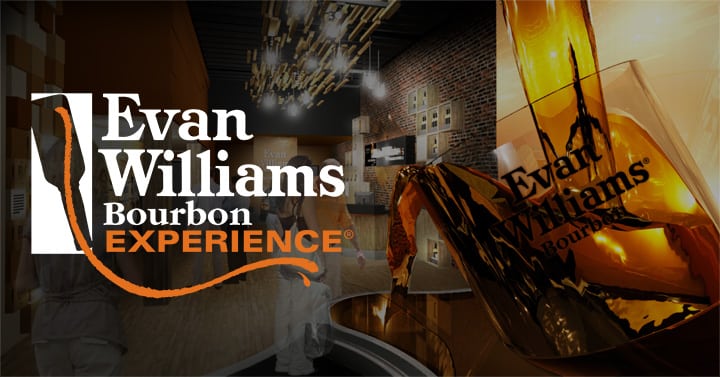 Many Louisville Jewish Families Had Early Ties to the Distilled Spirits Industry; Was Yours Among Them?

The Jewish community and the bourbon industry both have deep roots in Louisville, and on Tuesday, January 7, donors of $1,000 or more to the 2014 Federation Campaign had the opportunity to learn about them and taste some contemporary alcoholic beverages when Heaven Hill hosted a Louisville Jewish Federation Uniquely Jewish event, Bourbon and Jewish Louisville: A Shared Spirit, at its new downtown Louisville venue, the Evan Williams Bourbon Experience.

People mingled in the facility’s authentic recreation of a prohibition era speakeasy, enjoying drinks and hors d’oeuvres until the tours of this exciting attraction began. On the tours, they learned about Evan Williams, the first mass producer of whiskey and namesake of the popular bourbon Heaven Hill produces today.

Tour guides explained the distilling process he used, showed replicas of some of his facilities, and shared brief video presentations that provided additional detail. As visitors moved through history they stopped on a recreation of Whiskey Row, the mid- to late-19th Century business district that developed in Louisville around the bourbon industry before moving on to displays on prohibition and its repeal to the present day.

With a small active distillery on premises, visitors were shown how bourbon is made today and what makes it unique. A second tasting room, named after brothers Max Shapira and Harry Shapira, z”l, the second generation of the Shapira family to manage Heaven Hill, is also available during regular tours. Max Shapira is the company’s president.

Back in the speakeasy, Kate Latts, a member of the Shapira family, event chair, Heaven Hill’s vice president of marketing and a leader in the Annual Federation Campaign, welcomed everyone, explaining that programs like this were part of Harry’s vision for the Evan Williams Bourbon Experience, the first Louisville stop on the Bourbon Trail. Mayor Fischer, she added, has defined bourbon as an extra food group.

In pre-Prohibition days, Kass explained, many local Jewish families were involved in the distribution, wholesaling, rectifying, exporting, bottling and retailing of Bourbon.

In addition, Leon Lobred operated the Louisville Wine & Liquor Co. and wholesalers such as the Charles Bakrow Co., Harry Block Co. and Abraham Goldberg sold bulk whiskey to retailers and hotels and saloons.

In the distilling business, the best known Jewish producers were the Bernheim Brothers, Isaac and Bernard, and their partner Nathan Uri, who produced the I.W. Harper brand.

The combination of Prohibition, the Depression and World War II, Kass explained, drove many Jewish families out of the business and changed the business practices throughout the industry.

In the first years after Prohibition was repealed, there were no stocks of distilled spirits available in this country and the only major supplier was the Canadian Seagram, run by the Bronfman family. Today the Bronfmans are major Jewish philanthropists, providing the impetus and significant support for programs like Birthright Israel.

In the 1930’s and 40’s, several Jewish families reentered the bourbon and distilled spirits industry, “two of which today are the Levitch family, who formed Falls City Distributing Co./Crown Distributing Co./Southern Wine & Spirits of Kentucky, and the Shapira family, who founded Heaven Hill Distilleries,” Kass concluded.

JCL Board Chair Karen Abrams expressed appreciation to Heaven Hill for the great event, which, in keeping with the agency’s developing strategic plan, is an educational fun event series. She announced that the next two Uniquely Jewish events will include Jews and baking and Jews and comedy.

She also told those in attendance to watch for other upcoming activities, including increased family, outreach and interfaith programming. “To do all this,” she stated, “we need to raise more money.” She thanked those in attendance who had already pledged more than $100,000 to the 2014 Federation Campaign, and encouraged those who had not yet made their commitments to do so that evening.

Special thanks to Allan and Kate Latts and all of Heaven Hill for hosting this event.

Kass credited the primary research for his presentation to John Ornstein, with help from Siddy Rosenberg and the Temple Archives.

David Nathan Klein, 57, died December 29 at MD Anderson Hospital in Houston, TX. He was born and raised in Louisville, was a 1974 graduate of Waggener High School, and attended Ohio Wesleyan University and the University of Kentucky. David …

Rabbi Avrohom and Chaim Litvin have a kosher initiative, Kentucky Kosher, to promote increased kosher availability and options within the state. They will also provide kosher certification and supervision to food companies and manufacturers. In its initial weeks of operation, …

In the last three years, David Klein served as president of the Board of the Jewish Community of Louisville. He was passionate about his work and strove tirelessly to bring the community together in support of the agency and the …