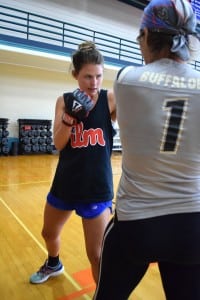 Morgan Price punched at the mitts on the instructor’s hands – jab, jab, hook; jab, jab, hook. She had no fear and no hesitation as she pounded those mitts. Instructor Rebecca Bell shouted encouragement at her, yelling at her to keep her hands up to her face and to use her core.

This is not a sweaty boxing gym like you see in the movies. This is Bell’s boxing class at the Jewish Community Center.

The popular class, which is held on Tuesday evenings in the lower gym, is a real boxing class, even if the participants aren’t planning to get into a ring.
The JCC only has one heavy bag and one speed bag, but that’s OK, Bell said. “Boxing involves so many things in order to get prepared for the ring,” she said. “You need agility, you need strength and you need speed. Very few programs actually have a speed bag, so JCC is very unique in that respect.”

Although only one participant can punch the heavy bag or speed bag at a time, Bell keeps the class occupied with different stations and breaks up the class in intervals using a computer program that dings like a boxing ring bell.

“There’s so much more to boxing than just punching, which I think is why so many people were disappointed in the Pacquiao-Merriwether fight because it was a technical fight, but it wasn’t a brawl,” Bell said.

Fighting experience
Bell is no stranger to the boxing ring. When she was living in New York years ago working as a fitness trainer, boxing was becoming more popular, and she thought, “I bet I could do that.” She learned there was a boxing gym right down the street from her, but she struggled to find it.

“I got the exact address, and it looked like a retirement home,” she said. “I was about to back out, and someone asked what I needed. They said the boxing gym was down two levels in the sub-basement. You could smell and hear it before you could see it. It was filthy. I thought, ‘This is a weird gym’.”

Eventually, she found the guy she was looking for. “He gave me the total third-degree. He didn’t want to train me, but eventually he took me on as a client,” she said. “It was right about when professional boxer Christy Martin was starting to make a name for herself. She was the first woman boxer who ever made $1 million on a fight.

“He trained me and thought I could actually do it. I trained for the Golden Gloves, but after the Gloves, I was sparring with a 16-year-old. My trainer realized I didn’t fight him like I did the women in the Gloves.”

Fighting in the Golden Gloves was an interesting experience, she said.

“It was intimidating, even going to the weigh-ins,” she said. “These women looked like prison guards! I had my heart in my throat. I had to tell myself, ‘I’m as tough as they are.’”

Training others
Now that she’s in Louisville, she trains people to box for exercise but she doesn’t change her methods.

“I train everyone the same,” Bell said. “I treat everyone as if they are a pro. I obviously have no expectation that anyone in my class is going to get into the ring. However, I still train them in that way, mainly because that’s just my experience.”

Sisters Morgan Price, 18, and Kaitlin Price, 16, have been taking Bell’s class since January, and Bell said she’s noticed a big difference in them. When they first came in here, they were giggly teenagers, she said. “Now they come in and get right to work.”

“I had always wanted to try boxing,” Morgan Price said, “and when the JCC got it, I was like, ‘I have to try it!’ It’s really different than any other exercise class you go to. It uses different muscles.”

Both girls said they feel tougher since they started taking the class. “When we tell our friends we do boxing, they’re like, ‘Oh!’”
The biggest change Bell sees in her clients is their demeanor.

“You carry yourself differently,” she said. “I see it in my class. It’s really empowering!”
Member Suzy Hillebrand has taken the class, too.

“It’s one of those classes where I can turn my brain off and focus on it” Hillebrand said. “But it requires me to think a little more, which I like. You have to think of the combinations she wants you to do.”

She said she never felt intimidated in the class.

“It was out of my usual scope,” she said. “I was on a kick to try something new every week, and that was my thing that week to try. It’s so much fun!”
The Price sisters said that Bell is a good instructor.

“She really encourages you and makes you feel like you can do it,” Morgan Price said.
Bell is just glad to be teaching boxing.

Boxing is 5:30-6 p.m. Tuesdays in the lower gym. The class is free, space is limited so sign-up is recommended up to two days in advance. Call or stop by the Wellness desk to sign up.

When World War II ended, and service men and women came back home, there wasn’t much fanfare. Soldiers and sailors just went home and restarted their lives. Now, some of those who served are getting a chance to get the …

Five local Hebrew school teachers traveled to the Western Galilee this summer as part of the Partnership2Gether Twinning program for educators. Amy Danino, Rachel Goldman and Karen Feder from Louisville Beit Sefer Yachad; and Bernard and Marilyn Pincus from The Temple …