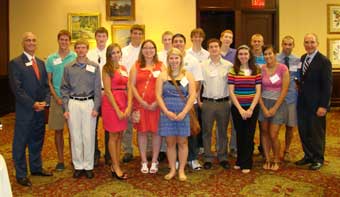 LEXINGTON, KY, August 23, 2011 — Fifteen University of Kentucky students, recipients of the Republic Bank Foundation Commonwealth Scholarships, met with Republic Bank CEO Steve Trager August 22 on the UK campus at a reception to honor them and to help kick off their freshman year at UK. Twenty scholarships were awarded in total.

Each Republic Bank Foundation Commonwealth Scholarship provides $2,500 per year in a renewable annual scholarship; the total assistance for each student is $10,000 toward the cost of a four-year degree program. This is the first year that scholarships have been offered.