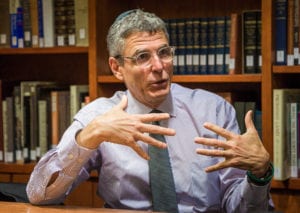 In a development that the leader of the North American Reform Movement has called “extraordinary news,” progressive Judaism is on the rise in Israel.
But the growth in the Reform and Masorti (Conservative) movements in the Jewish state may not be enough to move Prime Minister Benjamin Netanyahu to honor his commitment to construct an egalitarian worship site at the Western Wall before the next election.
Neither is it clear how, or if, Reform and Conservative Jews in the Jewish state will translate their growing numbers into political power, much like the ultra-Orthodox did.
In a visit to Louisville last Friday, to mark the 175th anniversary of The Temple, Rabbi Rick Jacobs, president of the Union for Reform Judaism (URJ), reported new findings from the Jewish People Policy Institute (JPPI), an independent policy planning think tank. Those findings show that the Reform movement now makes up 8 percent of the Jewish population of the State of Israel; the Conservative movement, 5 percent.
“That’s 13 percent of the Israeli population,” Jacobs said in an exclusive interview with Community. “That’s larger than the ultra-Orthodox population of Israel.”
Add to that the fact that last year, the Hebrew Union College-Jewish Institute of Religion, the Reform seminary network, ordained its 100th rabbi in Israel, and the trends look strong for progressive Jews there.
“Reform Judaism is not a North American phenomenon; it is not a German phenomenon, it is now a very Israeli phenomenon, and what changes people’s minds is they actually go to a friend’s daughter’s bat mitzvah. They go to a wedding of somebody, and they meet egalitarian Judaism, and they say, ‘This is nice. We’d like to have these options in our community.’”
But the rise of these movements in Israel doesn’t mean they will wrest religious authority from the government any time soon. The religious levers of power – marriage, conversions, the Kotel (Western Wall) – remain firmly in ultra-Orthodox hands.
That’s because the ultra-Orthodox have small, but powerful, political parties that can bring down the governing coalition if their demands for control of religious life are not met. Conversely, there is no such thing as Reform and Conservative political parties in the Jewish state.
And there isn’t likely to be. Much like in the United States, Reform and Conservative Jews hold a variety of political beliefs.
“It’s not on the left part of the political spectrum, it’s across,” Jacobs said. “We actually have Likud voters who identify themselves as Reform and Conservative.”
Will they vote to upend the ultra-Orthodox religious monopoly?
“They will vote,” Jacobs said. “Will they vote [with pluraism] as their number one, two or three issue? That’s always been the case. Over time, I think the issues of pluralism aren’t seen as a concession to North American lobbying; it’s about the very fabric of their society.”
For now, at least, Jacobs expects little movement by the government with regard to religious issues, including construction of an egalitarian, pluralistic worship space at the portion of the Western Wall called Robinson’s Arch. Progressive Jews already worship in that area, but the haredi (ultra-Orthodox) have tried to monopolize it, according to news reports.
Two years ago, Netanyahu’s Cabinet voted 15-5 to build an egalitarian, pluralistic prayer space at Robinson’s Arch and to have a pluralistic oversight committee.
But buckling to pressure from the ultra-Orthodox parties, the prime minster shelved those plans, angering many Jews in the Diaspora.
“To be honest, the government has made periodic noise that they are going to go ahead and do some of the upgrades on the space [at Robinson’s Arch], but they haven’t,” Jacobs said. “They put some materials in the area to make it look like they were about to do some construction, but they haven’t; nothing has changed.”
And nothing will change, he predicted, until Israelis go to the polls again.
“I think they (the Netanyahu government) are simply biding their time. This particular coalition is not long for the world. There likely will be elections soon. The prime minster is pretty clear, he doesn’t contemplate losing his coalition over the Western Wall.”
The president of the URJ since 2012, Jacobs, 62, grew up in California and was ordained in 1982. He served the Brooklyn Heights Synagogue and Westchester Reform Temple in Scarsdale, New York, before being tapped to head the movement.
Unlike most leading rabbis, Jacobs has a background not only in scholarship, but in dance. He performed with the Avodah Dance Ensemble, a modern dance company, from 1980 to 1986. He also studied at the Rubin Academy of Music and Dance in Jerusalem.
Since taking over the URJ, Jacobs has become a forceful proponent for religious pluralism in Israel, sometimes in the face of aggressive opposition.
He described how last year, while he and other progressive leaders tried to take Torahs into the Kotel plaza for a service for HUC’s newest ordained rabbis, he was pepper-sprayed, spat upon and had objects thrown at him.
“[But] we finished the service,” he recalled, “we finished our Torah reading – in the main plaza – a pluralistic egalitarian group including the four rabbis who would be ordained later that day.”

(Editor’s note: Community will carry a second story from the Jacobs interview in its November issue, in which the rabbi will talk about 2020 Vision, the Reform movement’s strategic plan for healthy, synagogues that meet the changing needs of the community.)