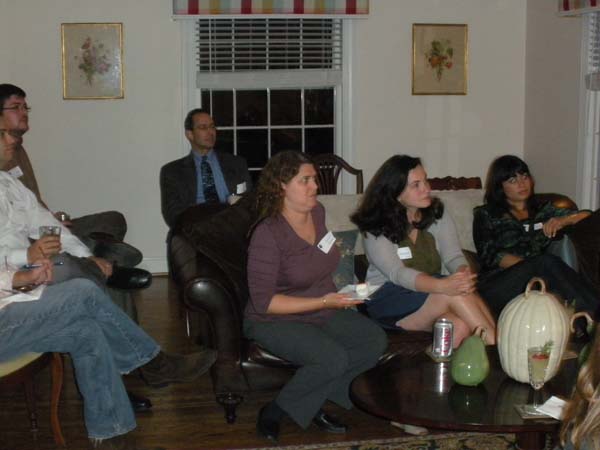 The Louisville Jewish community – every synagogue, every Jewish agency, every Jewish organization, including the Jewish Community of Louisville – depends on volunteers – committed individuals who are willing to step forward as leaders and invest their time, energy and resources for the future.

To ensure that new and emerging leaders have the skills they will need to serve on Boards and to keep the community moving forward, the Jewish Community of Louisville offers leadership development opportunities. One of the most intensive is the Young Leadership Development program.

This year’s YLD program, co-chaired by Scott Weinberg and Shannon Levine, began Thursday, October 14, when the class convened to get to know each other and to go over the plans for the year. Weinberg and Levine also gathered feedback from the participants on those plans before finalizing the YLD agenda for the year.

In addition to providing basic information on how to be an effective Board member, participants will have the opportunity to meet with current leaders and to participate in the Jewish Federation of North America’s Next Generation Young Adult Division Mega Conference in Las Vegas. Next year, each participant will also serve an internship on a community Board. They will also have the option of participating in a mission to Israel.

At the first meeting, participants heard from JCL Board Chair David Klein and met JCL President and CEO Stu Silberman.

“I am excited to participate in the YLD program where I’ll be able to learn more about concrete ways to contribute to and benefit Louisville’s Jewish organizations,” said Elizabeth Post. “The first gathering gave me the opportunity to meet fellow members of YLD and gain insight into the challenges and opportunities facing Louisville’s Jewish community.”

Jenna Koff, who grew up in Louisville and just moved back from Atlanta two weeks ago, feels that YLD is very important. “I really wanted to come back,” she said, “but I was apprehensive because I feared that the Louisville Jewish community wasn’t as strong and didn’t have as much happening as Atlanta’s. YLD is exactly what Louisville needs. It is a very positive step.

“Instead of bemoaning what we don’t have,” she continued, “we’re doing something for the future and it’s starting right now. I’m really excited, because YLD not only lets me give bacck to the community, but it allows me to have a venue to share creative ideas and have a positive influence on the community. I feel it’s an honor to participate.”

“It was an exciting start to the program,” Weinberg said. “Some participants have very strong opinions on the how to improve the Louisville Jewish community, and I am hopeful that YLD will not only help all the participants voice their concerns in the most constructive way possible, but also give them the skills necessary to help make a positive difference on our agency boards.”

Scott and Hunter Weinberg hosted the event in their home.