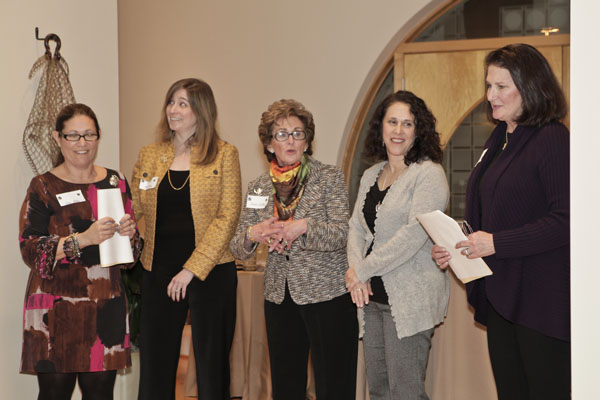 Sometimes the best-laid plans go awry. When Jewish Federations of North America’s Women’s Philanthropy Chair Gail Norry’s flight was canceled, it looked like the energetic speaker for the 2012 Federation Campaign’s Lion of Judah/Pomegranate event would not make it. However, some fast work by travel professional Mona Brodsky saved the day.

Norry’s plane landed while the event was underway and Jewish Community of Louisville President and CEO Stu Silberman whisked her to the event, hosted by Sarah O’Koon at her home, just in time for Norry to deliver her remarks.

She recounted her story of involvement in the Federation Campaign – how it helped her personally and how she was affected when she saw the difference the Campaign makes for others.

Participating actively in the Jewish community has always been an integral part of Norry’s life. So when their children reached school age, she and her husband, Elliot, chose to send them to Jewish schools. Soon after he began preschool, the Norry’s son, Ben, was diagnosed with autism and the school he attended couldn’t take care of him. She learned of a different synagogue with a program for special needs children and was delighted with what she found.

Still, she had a dream of sending her son to a Jewish Day School. A new headmaster came to Philadelphia, and he had started a special needs program in Chicago, so Norry asked why not in Philadelphia. She went to her Federation for seed money, and the Orot program began with two children in one Jewish Day School. Today, the program is so successful that 50 children are enrolled in Orot programs in five Day Schools.

Norry is not one to sit by and watch suffering. When she heard that the orphans of Rwanda’s genocide had no schools and bleak futures, she looked at Yamin Orde in Israel and approached JDC (the American Jewish Joint Distribution Committee) about starting a similar program there. Today, the school in Rwanda serves 500 orphans and has restored hope to the community.

Other life-changing programs she has witnessed or helped with include Birthright Israel; Reshet, a program to feed the hungry in Santiago, Chile; and Beit Naomi, a home for disabled boys and men.

On a trip to Moscow, she brought a care package to Naomi, an elderly Jewish woman who couldn’t leave her home. It included a radio to replace her broken one and restored her connection to the world.

In Israel, she observed the Youth Futures program, which matches young children with young adult mentors. The mentors make two- or three-year commitments to work at this low-paying job, but find it to be life-changing.

These are some of the wonderful things Norry has witnessed and been part of, thanks to Federation Campaigns across North America.

“Kol Yisrael arevim zeh ba zeh,” she concluded. All of Israel is responsible for the entire community. This is the message that the women who have made the commitments to be Lions of Judah ($5,000 minimum commitment to the Federation Campaign) and Pomegranates ($1,500 minimum commitment) understand.

Thanks to Sarah O’Koon for opening her home and hosting this event.